Journey: The Heart of Gaia

Liz has an ordinary, uneventful, perhaps even boring life working as a curator in her grandfather's museum of oddities, which doesn't attract many visitors, especially not of late with all the bizarre weather and earthquakes going on. Then a tall, mysterious stranger appears in the doorway to change all that and whisk her away to a fantasy world lush with color, where she is sought after and treated like royalty, where nothing is ever at all dull or mundane. That could be the entire plot of some steamy paperback romance novel but instead it's just the beginning of Journey: The Heart of Gaia, a puzzle-stuffed steampunk adventure hybrid from Waterlily Games, a studio of Frogwares. 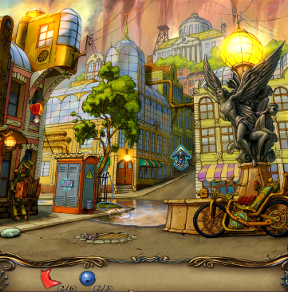 Although kidnapped without explanation, instead of turning the focus into why you're here, the main objective is about what you're going to do now you're in this place and how you're going to get back home. The answer to which comes from snooping about, looking in detail at every rock, plant, substance and magical device that Gaia has to offer in its eclectic landscape. Through this quest, you meet and befriend three helpful strangers, each with his own special ability and story to tell. Think Wizard of Oz. Except steampunk. And a much more sarcastic, proactive Dorothy. Plus tons of puzzles to solve, pieces to gather and objects to find.

Much like in the Drawn series, there are no isolated hidden object search scenes—gameplay leans on exploring and using items—either as collected fragments or whole objects—to activate a wide range of minigames which are freshly re-designed and clever, often challenging, renditions of such classics as tangrams, jumbled picture tiles, sequenced buttons, match games, pipe connect, othello, and more. If choosing "Advanced" mode, your puzzles are a tad more difficult to start out and you'll have fewer hints and help than in "Casual." In both modes, an illustrated smart map continually keeps track of your tasks, following your moves to give reliable guidance on where to go and even transports you to there instantly with a click. 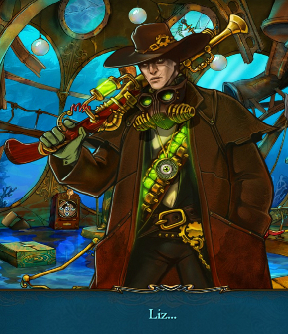 Analysis: With this wonder-filled and artistically-rendered creation, Waterlily Games lives up to their potential as a Frogwares sibling. The hand drawn artwork is enchanting and eye pleasing to the downside that you can easily overlook what you're looking for in the details. Items that you need to pick up are not hidden as much as they just don't stick out oddly among their surroundings. Then again, that's a good thing if you do like the challenge of finding objects but are bored with other games' pile 'em up and list 'em tacit.

True to its title, Journey: The Heart of Gaia presents a fantastic expedition, exploration, and discovery-worthy environment. Although it has a consignment shop feel to it, with characters and elements that seem borrowed from wider media and better known brands, it comes out more as fun allusion than tired ripped-off, sending a convivial wink toward those sci-fi, steampunk and fantasy stories that we all love. In this way, you're one of the group and part of the camaraderie, able to empathize with Liz as she repeatedly remarks, "This looks so familiar to me, but why?" 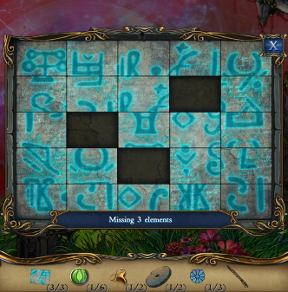 The addition of three companions is a uncommon quality in a genre which is often populated with helpless bystanders who leave all the heavy lifting to you. The "people" in Gaia are more than willing to take an active part in your mission and it's fun to use Zin's telepathy, Pr3's enhanced vision or Grump's strength though there will be times when you wonder why is a crystal up in that crevice so reachable while a piece of fruit in another nearby tree is not. It's a small quibble, really, when the outcome is this engaging, especially since these three friends are not defined by their special skills alone; each is a dynamic character with a distinct personality, they interact with you and even each other with humorous quips and friendly supportiveness.

Highly interactive and weighty, packed full of gameplay, most players are unlikely to finish it all in one sitting but the well-organized interface makes it something you can easily pick back up after a break. Journey: The Heart of Gaia delivers an overflowing cornucopia for both puzzle buffs and adventure fans alike.