The Peablins know no fear—as long as they're holding hands with their friends. In Joining Hands 2, the sequel to the cheerful tile-arranging puzzle game, a blazing ball of fire has crashed in the far corner of Whispering Woods. What is it? In order to venture out that far, they'll need your help in constructing happy hand-holding troops. Some Peablins have many hands, some have none, and others are very particular about where they're situated on the grid, so move each around the game grid until each is smiling and content. 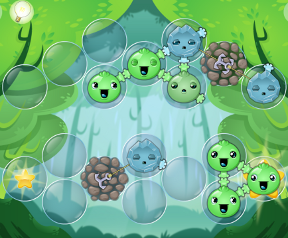 As complicated as some of the challenges may seem, even in later levels when there's an increasing number of character types, obstacles to overcome and empty hands to fill, playing Joining Hands 2 is never frustrating. Gameplay is completely intuitive: just touch and drag a Peablin around the grid, experimenting with placement until you've found the solution. If the spot is already occupied, the characters will switch places, just as long as both can fit where they're moved. Outside of new details and different puzzle challenges, little has changed between this game and the first Joining Hands adventure in terms of gamplay. Since there are 140 levels, the difficulty ramp is somewhat flat; it takes a while before any puzzle becomes too complicated to solve within a few minutes and, even when it does seem impossible, free and unlimited hints will bring quick answers. Without a level skip option, those seeking a heftier challenge might feel underwhelmed. For anyone else who likes to unwind and relax with a brain teaser, as well as families who want to solve puzzles together, Joining Hands 2 will charm and entertain for many hours of play.