There's more love in the air and fewer in-laws in Jim Loves Mary 2, the new puzzle platformer episode in the life of this adorable couple. Jim and Mary have had enough of Mary's pitchfork-wielding family and are heading for the forest. Just like in the original game, you'll control both of them, Jim with [WASD] and Mary with the [arrow] keys. By working together, they can solve the puzzles that keep them apart, collecting hearts along the way. Love conquers all and that sort of thing. 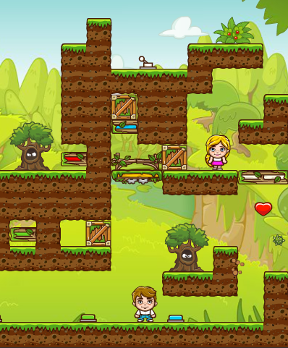 To add another aspect to the puzzly gameplay, Jim can jump higher than Mary, but she can crawl underneath low ceilings. They usually start out on opposite sides of the screen and can help each other by pressing various buttons, pushing boxes and pulling levers. Collecting hearts matters even more than before, since they act as hit points – this time around there are more enemies, and no one likes having to restart a level because Jim got killed by a vicious tree. Jim Loves Mary 2 has kept the visual appeal of its predecessor. The cute bobblehead characters and vibrant colours have become Flazm's signature features, and they work very well with the lovebird theme. On the other hand, the gameplay is improved: it's still not exactly difficult, but it's more elaborate and therefore more fulfilling. It's certainly worth your while if you're looking for a cheerful, casual, star-crossed-lovers-helping experience.

have both Jim and Mary jump over the spike pit at the same time & hope they meet in midair before one of them touches the instant-death spikes that make you start the whole level over.

Did they really think trying to do that over & over would be any fun? >:(

I got frustrated on the first jump for Mary, then to get all the way through to the spokes at the top, only to screw up and have to do that first jump again...

One thing I found helpful is to remember that Jim jumps much higher than Mary, so he takes more time for that jump. Took me a couple of times to remind myself though.