Often I think to myself what I would do if I was ever in a futuristic jet on a futuristic highway chasing tanker trucks, launching missiles at them, and all the while avoiding sentry and assault drones. With Damien Clarke's new game, Jet Speed, I no longer have to ponder this theoretical scenario in my head—I actually get to give it a try!

Let's be honest with ourselves, I think everyone has thought about this at some point—it's perfectly natural. But I've got sour news for you my friends, it isn't so easy. Quite often (every time) my futuristic space felon fantasy results in me and my ship exploding bit by bit all over the screen.

That's because you've got a lot of challenges: not only do you have to dodge traffic as you careen all over the road trying to launch missiles at the escaping trucks, but you also face the powerful sentry / assault drone pair. Sentries will be on the lookout on the road scanning portions of it for your ship. Should be spotted, a powerful attack drone will come at you, launching ten nasty missiles in your direction. Dodge all ten and the drone will foolishly assume you for dead and leave; catch a missile, and you can come hang out with me in futuristic space felon heaven.

Use the arrow keys to move side to side or speed up and slow down. Spacebar will launch your missiles but be careful—ammo is limited and only refilled after destroying a truck (which makes me wonder why I have this insatiable urge to destroy ammo and health trucks when I could just be civil and keep the ammo and health I already have).

After a number of trucks are destroyed, the police will hack into your ship and remove your number of health blocks and ammo available between trucks. There's no way them, trust me I've tried, so you'd best get use to using as little ammo as possible and maybe stop playing "bump the car next to you." 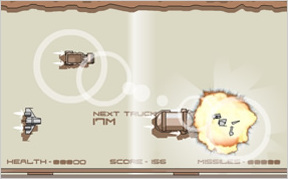 Analysis: Jet Speed is fun, a lot of fun. It's a simple but well polished game with fast smooth gameplay and some different challenges to keep it interesting. It also features a high score board so you can see how you compare to the other felons on the road. Don't look for my score though, it's way at the bottom.

Damien also threw in an Assault Drone training mode to help the poor saps like me with slow reflexes. Take advantage of it, the assault drones were the #1 reason I met an early end in the normal game.

Bottom line, check this game out. Not only will you enjoy it, but you'll finally answer that age old question: "What would I do if I was ever in a futuristic highway chase?"

Bonus: Yup, I contacted Damien, of DX Interactive, yet again to get an inside scoop on this and future projects. Says Damien:

"Jet Speed was first built as a test to get particles and lens flares working with flash 6 (which was the newest version when I started this). That was successful and it looked really nice but I could never get the game to feel right. One of the hardest things about making games is getting the right balance between frustration and determination, making it ramp up the difficulty at the right pace, keeping people interested. And to begin with I just couldn't get it. So I left it there unfinished.

"Two years later I re-discovered it and thought I'd finish it. Added the drones, updated the graphics, made the music for it and built some menus. Complete game ready for the internet done in less than two months :) That's a record for me at least."

For my last review of his game, Missile Game 3D, Damien said he was working on a futuristic 3D police chase game. I asked if this was it, he said:

"Well this game can pretty much be the prequel to the 3D police chase game. Imagine Jet Speed being mashed in with the Missile Game 3D, and that's how I'm planning that police chase game to be like. So far I haven't started working on that one yet."

Doh! I was looking forward to that game. How long are you going to make us wait?

Finally, I had to ask why, on the high score board, some people with less trucks were so much higher than other people with more trucks destroyed.

"The scores are worked out by how much time it takes to blow up each truck. So the faster you are, the much higher your score will be. I don't know how some of the people got such high scores... teach me your ways!"

Can any of you get to the top and teach us?

uhh, i think its broken... when i go to the page the start game screen comes up but i cant mouse-over any of the buttons

The game is keyboard controlled, so use the arrow keys to select an option, and press [space] to select.

heh, how about that. it works

Great game! Very responsive controls, and fun to play. As far as score goes how fast you you take down each truck definitely has something to do with it - you get more points the faster you go. On my first attempt, I got 3258 with 21 trucks; next time around it was 3941 with 20.

Avoiding the drones is pretty easy; their cone sweep speed is slow enough that you can usually zoom by without too much trouble. Also of note is that you can fire straight through them without the missile or the drone being affected, so feel free to take down a truck directly in front of a drone.

hmm 4923 with 21 trucks... i hate having only one life because i tend to try to zoom through everything XD

With a bit of practice, I managed 10739 points and 60 trucks; only had to dodge an attack drone once throughout. Unfortunately the highscore board doesn't seem to be loading for me so I have no idea how good that is.

After the first 20-odd trucks you're down to one hitpoint and one missile, which means being careful trumps being fast. Watch out for the trucks smashing through cars in front of them - if you're too close, the explosion can take you out; or if you fire a missile at the truck it can explode prematurely. It's best to wait for the road ahead of the truck to be clear before taking a shot at it.

Lots of fun to play-very smooth, and it's got that Zen-like "in the zone" feel to it when you're going along at a good clip. The opening screen should say "press space to select", though-the player shouldn't have to try mouseover, return, enter, and then space to continue!

There must be some error or something going on here because I just got 6391 points with 4 trucks killed. . .

25 trucks, score of 5274... not once did I get detected by a drone, if only because I didn't have the droids they were looking for.

I really appreciate all the time and effort you guys at JIG pour into the reviews, and I certainly understand that it might be hard to come up with a fresh approach to each analysis and presentation of a game, and this might just be me, but;

I am growing a little tired of the "As long as I can remember it has always been my dream to [insert weird premise of the game here], and now, alas, with this new game I can finally do it (haha, you see it's funny because its ludicrous that I should ever dream of doing something so bizarre and yet specifically detailed)"-opening of a review.

Although this is a sort of, not really though, cute way to underline that some games have crazy backstories, it has been used waay to many times now. Let this be the last time.
You guys study and stuff, come on, be creative

Otherwise in every aspect apart from that; Love the site.

There definitely seems like some sort of scoring bug somewhere; I was just playing and got 300ish points for the first truck, as usual - but after killing the second truck I had 5593. No idea why. Under normal circumstances, the highest I've been able to get is about 350 points per truck - and that's going as fast as possible, without letting up on the accelerator.

Hahaha, oh man. Alright Chris, you totally called me out on it. I can't deny you've caught on to what was previously my totally secret review structure.

I'll try to deliver something a little more fresh in the future.

That game rocks. I can only get up to 20 truck though...And the funny thing is, i have daydreamed of being a felon on a futuristic highway chase.

Fantastic! Zooming along destroying stuff. I played this earlier whilst my 5 year old son was playing with his radio controlled Dalek (probably the finest piece of mass produced, over-expensive plastic rubbish ever produced anywhere ever), and he stopped asked if he could have a go so it must be pretty good. I played with the Dalek.

Held down the accelerate button and zoomed along.

Seems like tip for getting high score is to keep accelerating and never let up.

Teh troll :o Cool, I'm not going to feed it.

My favourite thing to do here is weave through traffic, and occasionally shoot them. i can get to the part where you get three of each point (around ten trucks) before i A-SPLODE! good game.

I total suck at this game but I LOVE IT