Jasper's Journeys is a downloadable platform game for Windows and Mac OS X created by Lexaloffle Games. It plays much like an old-school sidescroller where exploration is essential, power-ups are sparse, speed is often encouraged, and secret areas are plentiful. In many ways it's similar to Brad Borne's The Fancy Pants Adventure games (or even Sonic the Hedgehog, Super Mario Bros, or Jazz Jackrabbit), though with a decidedly different atmosphere and updated look and feel. 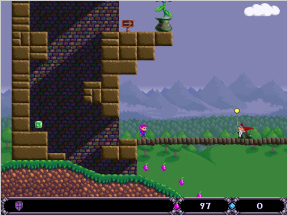 Jasper's cat, Orlando, has been nabbed by a not-so-nice witch who intends on using him as ingredient in an evil potion. Our flowing-haired hero sets out on a journey to save his feline friend, pitting him against strange fantasy enemies with nothing more than fruit-powered magic discs as a weapon. Use the [left] and [right] arrow keys to move, [Z] to jump and [X] to attack. You can also use a gamepad, which makes the experience all the more sweet.

Most of your time playing Jasper's Journeys will be spent collecting fruit and gems, the former supplying ammo, the latter coinage to buy game saves and items. You'll also pick up shields to protect you against monsters and gather golden orbs in each stage to gain access to secret treasure rooms. Explore each level as thoroughly as you can, taking different paths, backtracking, and trying out extremely difficult jumps. It seems like there's always something new to discover, whether it's a hidden room full of gems or just a few pieces of fruit tucked in an out-of-the-way space. Finding these treasures is half the fun of the game. 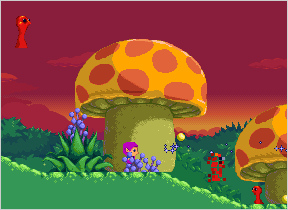 Analysis: Overall, Jasper's Journeys is a simple and surprisingly straightforward game (in terms of mechanics and design) that caters to gamers who grew up with Sonic and Mario as their heroes. The visuals are superb, capturing that retro feel we love so dearly but updating it for our graphics-spoiled eyes to enjoy. Music is missing from much of the game, which lends a rather somber backdrop to the adventure. I found myself craving a deliciously retro tune now and again, nothing too intrusive, just something to add the very slightest bit of lightheartedness to the experience.

When you first play Jasper's Journeys the controls will feel sluggish and maybe a bit sticky. The physics aren't immediately intuitive, adding a very slight learning curve to controlling our red-haired hero. Mastering a platform game means mastering the nuances of the controls, however, so one should take it as being a part of the game, not necessarily an obstacle to enjoying it. The action really heats up after ten or so levels, so if you were worried about not having a good challenge, think again.

One drawback to having a game with so many secrets is that you are often overwhelmed with things to do. On several occasions I found myself wanting a little more streamlined and, dare I say, linear progression. Secret rooms are fantastic, hidden gems are wonderful things to uncover, but sometimes I wanted that old feeling of accomplishment that can only be had by completing a stage. Sure, if you stick to the high ground and keep moving right you'll eventually get the exit, but I still want to find a few casual secrets along the way. It's a balance Jasper's Journeys gets right about three-quarters of the time.

Jasper's Journeys is a game of playful exploration and platforming timing and reflex action. A great treat for fans of classic side-scrolling games, but an excellent title anyone will enjoy.

I bought this without thinking twice after playing the demo. Haven't been disappointed, except for the sometimes long periods in-between save points. It doesn't really remind me of Sonic or Mario or any of the popular console games. It's much more like the PC platformers like you could find for the Amiga, with heavy emphasis on collecting treasure and tough bullet dodging. Jasper started out as a DOS game, apparently, so when Lexaloffle first wrote it, that was the style. I'm glad he decided to update it. I miss games like this.

This game seems great! Glad to find that it's available for the Mac, too; not too many games like that.

It's got nice graphics and a pretty decent story, and I didn't notice that the physics were sluggish at all. I hope to beat it soon. :D

Also, I love the secret passages, and the level design as a whole.

The demo works in linux, under wine.

Definately worth the money only just over £10 here in the uk - just a fun little game to pick up and play a level every day.

I really like the mix between exploration and getting to the end of the level - gives you a lot more freedom than the usual linear platformer.

I think the only thing I would like is more save points so you could go back to each level and try to figure out all the secrets.

I love this little game -- bought it right away. Now I'm stuck on level 10, the city in the clouds. Those nasty floating dolphin things are brutal! Anyone post a walkthrough yet? I can't seem to find one.

Absolutly stuck on level 10. Can't seem to avoid those dolphin/fish things. Can anyone offer some help on how to avoid/disable them? thanks LeslieV

fantastic platform game, I like the demo, which has 3 levels and you can play it in your own time, no dashing around hoping you can clear a level before an hour is up, like on most games, i bought it and think its great, about the dolphin's, i just shoot the h out of them and it mostly works. great game more please.

i have gone back to the first game and i still find out how to get to the lower goodies, you go down a shute but cannot move to the right. when you get to the end on the left there is an area with goodies and i cannot get these also. does anyone know how to correct this? many thanks

An excellent game. A couple things could have improved it, however:

1. A "level select", perhaps unlocked after you have completed the game for the first time. Occasionally I want to explore the hidden areas on a certain level, but to do so I have to play all through the previous levels.

2. Most of the game has a very other-worldly, mystical feel. Mice-like little men, fire ogres, etc. The final boss (the witch) breaks this feeling. She is purely ugly and purely evil, with none of the pleasant whimsy that surrounded the rest of the villains (even the nastier ones). I would have preferred the final boss to keep the whimsical, surreal feeling.

3. It would be nice to be able to purchase the different potions on the final level, to fight the witch. IIRC the only ones available are the triple shot (must be purchased) and the infinite-ammo (is available to be grabbed, free). These certainly make an effective combo, but it would be fun to be able to experiment with the others as well.