Jamal and the Wasp Bunker 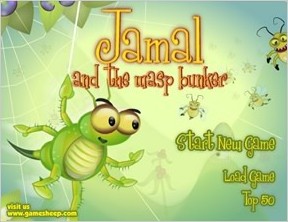 Brand new from Gamesheep is this charming, albeit frustrating, little side-scrolling platformer starring an adorable vegetarian spider that is able to walk, jump, and swing from its own spidey-thread.

In Jamal and the Wasp Bunker, terrible enemy wasps are suspect to the recent disappearance of inhabitants of Golden Claw Village, and Jamal sets out on an heroic adventure towards the Wasp Lair to rescue its friends.

To control Jamal, use the arrow keys for movement, [left] and [right]; press [up] to jump, and [down] to crawl. These are fairly standard controls for a platformer, and yet Jamal puts a spin on the classic formula.

Instead of providing the usual double-jump to get across larger chasms, the Gamesheep developers have equipped Jamal with the ability to shoot a thread with which to swing from and climb on.

Press [shift] to shoot a thread; hold down [ctrl] while pressing [up] or [down] to change the angle of the thread that shoots. Once on the thread, you can press [right] and [left] to get a better swing going; press [up] to climb, [down] to descend. Press [shift] again to jump off the thread.

Collect fruits while avoiding an array of enemies as you make your way through each level. Progress can be saved only after levels 3, 6, 9, and 12.

Analysis: The art direction for the game is excellent and contains gorgeous backgrounds and tile sets. The animations of the creatures are all wonderfully detailed and gives each of them character consistent with the insect theme of the game. The over-world map is a nice touch that gives the player feedback regarding progress toward the ultimate goal of the game.

Separate controls for music [M] and sound effects [S] are provided and very much appreciated; unfortunately, the single music loop that serves as background soundtrack for the game will likely have you pressing [M] before completing even the first level. A more sophisticated audio implementation is needed consisting of switching often between several different loops that serve to establish mood and for situation setting themes. Audio is an often neglected component of Flash games that can significantly affect the overall quality and value of the game play experience.

The physics in the game also needs some polish. Jamal seems to float a little longer in the air than I would like, which gives a feeling of lag to the action. I prefer platform games to have a higher gravity constant that makes jumping feel a bit tighter. Maybe I've been spoiled by Nintendo's work in this area, so this may be just a personal preference. The absence of the ability to "run" was sorely missed on long straightaways that made going for those distant fruits a bit painful.

The game is quite difficult to get through due to some very brutal level design and its less-than-desirable physics implementation. This will make Jamal and the Wasp Bunker a tad frustrating for the casual gamer; however, the more hardcore gamer may find that it offers just the right amount of sting to get caught up into. You decide. Either way, it's very pretty to look at.

Play Jamal and the Wasp Bunker

Am I crazy or is the title music exactly the same as a track used in one of the 'Ball revamped' series?

I dont know if its me or what they consider a fast or slow computer but things were a crawl (bad pun! bad pun). Unplayable and Ive recently installed the newest Shockwave :\.

The art and the sound of this game are really wonderful!

Wow, this game is beautiful but annoying. First of all, the game speed up and slows down as you walk around, making timing jumps etc. difficult (when I said my computer was "slow," the problem was still there, just everything was faster). Second of all, you lose control of your spider when he gets too close an edge, so trying to jump at the last minute is frustrating. Ugh.

Such a pretty game, I'd like to play it, but the control and speed issues are too much.

That's what I thought too, Grewt.

Speaking of spoiled by other physics engines, I couldn't cope with the roping mechanics in the game because of my experience with Worms. Also clipping through the edges of little pieces of land makes some levels a lot tougher than they're probably supposed to be...

I also think that bill but there is somthing that bothers me more. I have no idea how to save! Someone help.

I have two words: POOR QUALITY. This is their dumbest game yet, I can't control the spider, the web thing won't let me swing high enough to get past, and the stupid snails are impossible. This sucked.

First of all, yes, that track is SO from ball revamped.

Second of all, I don't think that physics engine is MUCH worse than Jay made it appear to be, it's so bad the spider is virtually uncontrollable. This is especially evident with rope-swinging - it is a wonder that the game which relies so heavily on the rope manipulation would make it so frustrating and unenjoyable.

This is very sad because I was especially looking forward to some good old rope swinging - I seriously loved Ninja rope in the old 2D worms games...

The music is off the garage band music creator software on mac's. Mine got stuck generating a world for over 5 minutes so i left it.

this games is so so annoying... i have to say this is a game i hate, i really dont like it at all

The controls are awful. The bug just moves slowly along, and if you ever build up a decent speed you're likely to wind up running right over a cliff because it's hard to stop once you've got yourself going. You can't change directions in midair, which makes sense in real life but not so much in a platform game. The thread-shooting feature isn't flexible enough: Several times I saved myself by shooting a thread onto a handy wall after nearly falling to my death, but wound up dying anyway because after you've stopped your descent it's almost impossible to fire off another thread before you hit the bottom of the screen. It's also possible to get stuck on a ledge while trying to climb up the thread, which A) doesn't make any sense and B) is irritating.

All that's really too bad, because if the controls were a little better (get rid of the "continue moving forward a few seconds after letting go of the arrow key" thing and allow the character to move a bit faster, for instance) this could be a pretty good game. As it is, it's not really worth playing.

can someone please help me? At the start of level two, you go past the first turban guy, HOW THE HELL DO YOU DO THAT JUMP?