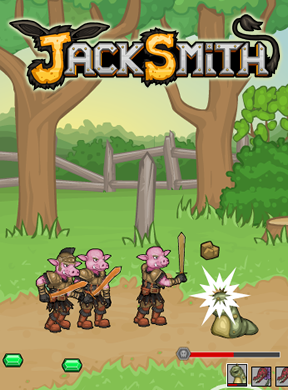 Flipline Studios' Jacksmith is primo hero material, you guys. Except for, uh. The whole "might" and "talent" thing. I mean... he's a pretty good blacksmith, but there's a reason donkeys don't do a whole lot of adventuring. If he wants to put an end to his money woes and rescue the princess, however, Jack's going to have to learn... or at least be willing to shell out a whole bunch of free weapons to pay people to do his work for him. In this fantasy simulation game, you'll join Jack and his friend Scout on the trail of the dastardly wizard who nabbed the princess, learning to forge increasingly more powerful weapons for the soldiers who are willing to pick up arms for him, and gather new, more powerful blueprints and materials along the way.

Despite there being nary a fast food item in sight, gameplay is pretty similar to Flipline's Papa's series of games... only with steel and pigmen. At the start of each day, Scout will warn you about the incoming enemies, and you'll have to create the weapons your soldiers will use to fight. They'll place orders, and you'll fill them. Each one will tell you what they want, but if you have better materials, you can make the rinky-dink base weapons they'll use even better. Select your material, smelt it down, carefully pour it into the mold, and then finish it off appropriately. Swords need to be carefully hammered to create a solid edge, for instance, while bows need to be stretched tight. Don't skimp on the details, since the more accurate you are with building weapons, the stronger those weapons will be.

Oh, and don't worry about getting your hands (hooves?) dirty, since your soldiers fight automatically at the end of the day. All you need to do is move your cursor around to collect the treasure enemies drop, which can be anything from crafting resources to gems. Gems can be spent on more materials in Gander's shop. As the game wears on you'll earn different types of catapult ammunition you can launch during battle with a click to deal damage and help you turn the tide of war.

Though Jacksmith's deviation from the established Papa's magic formula won't be to everyone's taste, it manages to make a familiar concept feel new in some clever ways. The forging is given surprising depth with the many recipes and different parts, and since they actually have bearing on the outcome of battle you feel invested in making them the best you can. The animal people are the stuff of nightmares, but the vibrant design and fast paced gameplay makes this one a lot of fun even if it might not have the same breezy addictive quality of other Papa's games.

You know, the last Papa's game I didn't play too much, and kept thinking, "Gee, it's about time they did something different." This is exactly what they needed to do! It's familiar and easy to pick up, but at the same it's extremely unique.

Now, if I could only get over the fact that Jack has hands and not hooves...

I hate the Papa's series of games - a bunch of time-intensive, repetitive busy-work that is ultimately a lengthy grind. And I can't play them at home as they're not trackpad friendly in the least. And they've all seemed like a lesser version of the Cooking Mama games for the DS.

This game, however, has an interesting premise at least. If it were trackpad friendly and the resource management were less obtuse I might play it at home and attempt to pursue it to some sort of satisfying conclusion.

I played it with a trackpad with no problems, and it's one of the reason for which I like this game, this and the forging mechanics. :)

I agree with the others -- I just couldn't get into the other games. The mechanics were more finger-destruction than fun. This is fun. It's got a good pace, it's got depth and story, and you get to hit stuff. It's like they got a dose of nerdook.

Geek ragequit at the point I was asked to make bladed weapons out of gold.

Kind of fun other than that.

@ motty So stabbing and cutting weapons made from a soft metal bother you, but the fact that you're a magical talking donkey with human hands does not? ;)

There is a certain annoying repetitiveness to this game, but I still find it quite playable and fun. I'm also enjoying the degree of removal from the violence. Swords don't kill fire-breathing worms, anthropomorphic pigs do.

Putting all those pegs on the mace is kind of a PITA.

Got hooked on this one, and like the fact that it's a pretty different concept, it keeps you interested trying to match the weapons to the classes of beasts, and it's easy to play for 5-10 minutes at a time.

Got to the end, faced and beat the final boss then....wait....what? So you've

defeated Dudley, saved the princess, sat through the long but mildly-amusing cutscene

and now you have a half-cozen more levels, with no real reason to play them?

Its a fun game but it does seem to have a snowball effect.

If you mess up a level and your dudes can't kill the main boss, guess what? You don't get the loot and the special epic weapon blueprint.

That means you are less likely to have an epic weapon in your next fight(s) which are quite powerful and boost EVERYONE's stats, and thus are more likely to scrub out on that scenario too, which continues the downward spiral.

I guess if that happens you could try just making a bunch of copper weapons and not getting very far each time and gathering as much loot as possible. But even then you are still 'making progress' instead of staying in the same place and grinding some so you can get more parts and stuff, in order to be able to kill the bosses.

Basically once you fail to kill a few bosses, the game will ensure you ALWAYS fail because you won't have the epic weapons.

At least in earlier levels, I didn't have trouble when I skipped a few bosses. Make up for it with metals/upgrade pickups during battle, and pay close attention to the elemental weaknesses. All you need is one or two fighters to survive to get through a level. Epic weapons seemed like a nice goal, not a necessity.