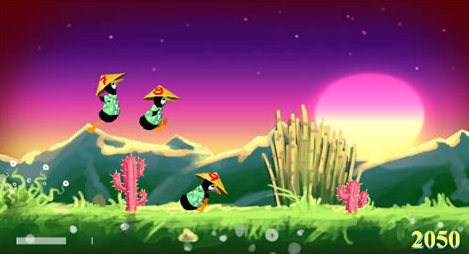 This gorgeous little game, The Malibu 9 Rescues Mr. Malibu (and 6/9 of the Deepfried Posse), was originally an advergame for a club in Stockholm, Sweden (Club Malibu), and that may not even be in existence any longer (you know how clubs just come and go). It's an irreverent game that pokes fun at Mexicans, Eskimos, and the Chinese (most likely references to the people involved with the club), but it's delightful none the less in its graphics, soundtrack, and gameplay. The gameplay mechanics are very easy to pick up, initially using only the [7], [8] & [9] keys on the numeric keypad, then building in complexity as the game progresses. There is even a little intro sequence which sets the story of the game and establishes the characters, and cut scenes along the way. Top-notch production in a fun little Flash game.

Chris - good luck with the wait. I doubt you'll ever see it. I believe the game was created as part of an advertisement for a club that is no longer in business, or at least the site which originally housed the game no longer exists. I had to find a mirror site to link to, so even this game's days are numbered.

It would be nice, though. I definitely feel that this game had a fun gameplay mechanic going for it.

I was reminded of this game recently, and wanted to see if it ever made it on JIG. I guess it did, a looooong time ago :)

Played it again just for kicks, and yes, it's still as awesome as I remember! Wish the sequel had been made...

this game is very similar to Summer Walk from orisinal.com... hm

its got nice scenes, i guess