Ah, the old west. Lawless bandits, tumbleweeds, open sky. Kind of makes you want to practice your typing, doesn't it? That's the idea behind Khromatique's Jack MacQwerty, an arcade game-meets-typing tutor set during a gunslinger's last stand. You play as the titular Jack MacQwerty, fastest typer in the west, squaring off against an oncoming horde of bandits and marauders, each with a name goofier than the last. You must type each name as it comes towards you to blast the bad guy away, while also making sure to type "reload" when your chambers run dry. Innocent hostages will start to mix in with the baddies, so you need keen eyes and fast fingers if you want to last as long as possible. Give the game a few tries and you'll be chewing through the alphabet like a pro. 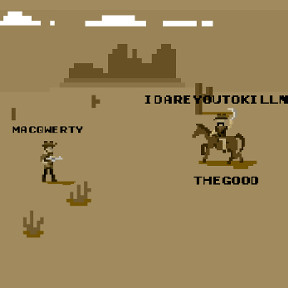 Like some endless games, Jack MacQwerty holds you exactly as long as you want to be held. Most of the bits to discover come in the first few minutes, so the late game is all about speed and not much else. It's still fun though. You'll likely get a giggle out of the wackier bandit names (a bandit name "HAKUNAMATATA" came in riding a horse named "MOVIE" once) and the decidedly retro graphics and sound paint a pleasingly minimalist picture. And there's plenty of thrills to be had trying to beat your last high score. The bad guys will charge towards you on horseback, among hostages, or just with guns a-blazing from the get-go, so keep your fingers loose and your wits sharp. And ride out with Jack MacQwerty for one last typing-based showdown.

You can type in "MacQwerty" to shoot yourself. I found that amusing.

Actually one of the better type-training games with some nice features.

However, I found the scoring by earning money for shooting people an unnecessary twist.

Oh, that's cute. Not up to the Icarus Proudbottom series, but cute.

In all seriousness, I might use a game like this to help me learn the Dvorak layout or some such..