Nostalgia is sort of a cheap shot when it comes to gaming, because some people will play anything if you tell them it was inspired by something they loved and played before. But it's not enough to simply toss out names from your childhood. That's not what makes a game good, and it's no guarantee that what you're playing is in any way as fun and cool as those titles were for all the right reasons. Fortunately, Ludosity's indie action adventure game Ittle Dew gets it. A gorgeous, silly, engrossing game that's filled with subtle nods to the gaming greats of yore without ever losing its own style or remembering exactly why you loved those games in the first place. (Coming to Linux, iPad, and Android tablets this fall!) 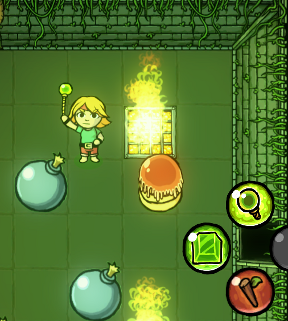 The game stars the titular heroine Ittle Dew, a brash, barefoot, adventure-seeking young lass who likes to hit things, and her snarky flying magical fox companion, Tippsie. When Ittle finds herself shipwrecked on a strange island, all she cares about is finding as much adventure and excitement as possible, and fortunately for her, this place has it in spades. Move with the [arrow] keys, advance text or make selections with [enter], and use [Z] to swing your stick. Don't worry, you'll find more hero-appropriate items soon! If you get stuck, hit [T] to get a hint from Tippsie, and keep track of where you are on the map with [M]. Ittle will have to travel all over the island, exploring not only the enormous castle but the island proper, which is packed with dungeons (including a "master" one) and secret areas. 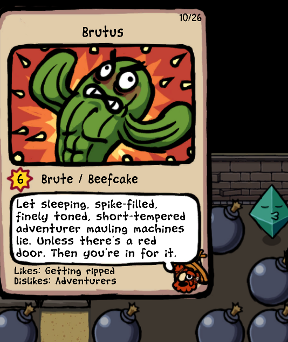 Though there is combat, many enemies require some puzzling and thought to defeat over simple stabbin'. As it happens, instead of an entire pile of items, your arsenal will consist of just a few, such as a fire sword or portal staff, that can be used alone or together to manipulate your environment in different ways. The game's focus on thinking over typical action-adventure hack-and-slash means that it's never mindless, and virtually every single room is its own contained puzzle. If there's a downside, it's that challenging though some of them may be, the bulk of the puzzles tend to revolve around pushing blocks in some shape or form, which wears a little thin as the game goes on. Fortunately, the limited item inventory adds another layer of thought when you find yourself forced to come up with ways you can use your items together to get past obstacles instead of just immediately knowing one area is for ice, another is for teleportation, and so forth. The boss fights 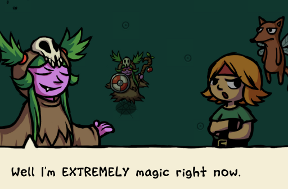 Ittle Dew is one of those games whose style seems distilled from pure rainbows, unicorn smiles, and sass. It's unrelentingly cheerful, and the creative enemy and character design really shines. The willingness to be both goofy and thinky is something we could do with more of in gaming in general, since it often feels like most titles draw a line in the sand between humour and challenge instead of attempting to marry them as successfully as Ittle Dew does. It may be on the short side ultimately compared to its inspirations like Zelda or The Secret of Mana, but the sheer amount of optional puzzles, collectible cards, and "professional shortcuts" means aiming for 100% completion, much less a high-ranked speed run, you'll still find it a satisfyingly meaty game. With challenging puzzles, memorable characters, boss fights, secrets, collectibles and much more, it's just the ticket for action-adventure fans with a sense of humour and fondness for surly, weapon-wielding girls in animal costumes.

Thanks to Daniel Kaplan for suggesting this one!

I love this game! This is a great Zelda clone with a terrific sense of humor that focuses on puzzle solving. It is a little short but there is a lot to do if you want to get 100%.
Definitely worth every penny!

This game is also available on the linux platform now :-)