It's Raining Cats And Dogs 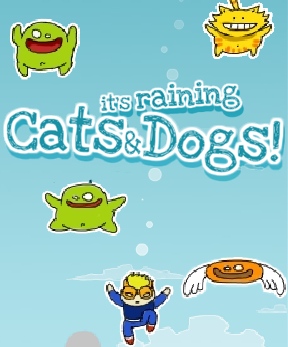 Let me start this blurb by saying that the title is a lie. It's not raining anything. It's a single dog falling through the sky while cats and other things probably not in line for household pets or foreign bistros are floating around. But It's Raining Cats And Dogs is a much nicer name than, say, "Puppy's Plunge Into Oblivion" for this simple arcade title from Umut Dervis.

The controls are so simple that the menu screen is enough for you to grasp them. Move the falling dog with your mouse and bounce off the various creatures that float past. The aim is to not drop off the bottom of the screen, build point combos by hitting the same creatures in a row and avoiding some critters. Last as long as you can and get as high a score as a plummeting canine can achieve, bouncing off the occasional fat (alien?) cat for a score bonus.

It's simple and addictive, the hallmarks of any good 'keep going as long as you can' game. It's fun, it's colourful and it has a cute soundtrack. Really, more does not need to be said, other than some at JIG Towers speculate that this would make a great iPhone or Android game. No argument there.

Play It's Raining Cats and Dogs

Game doesn't load for me. Just sits at "0% loaded"

@Zero-K I ran into that problem once. Try reloading.

There is an extra mark at the end of the link..delete it and then reload

[Fixed. Thanks for pointing that out. -Jay]

It was fun through the first 20 levels, then it just became too hard to die even if I don't move my mouse at all...

"...would make a good iPhone game ... " in fact it's a straight up rip of a tremendously popular iPhone game called Doodle Jump.

Oliver - I disagree. In DJ you jump UP, in IRCAD you're falling DOWN.

Also, in DJ you tilt the iPhone to move; in IRCAD you move the mouse. The gameplay even feels very different.

If IRCAD is a rip of DJ, then DJ is just a rip of other games to come before it.

Or Kill the Pacman:
https://jayisgames.com/archives/2004/09/kill_the_pacman.php

First impression of the game:
"IT DOESN'T SLOW DOWN YOU"

LOL! And that's why I always read the instructions :p

Cool, quick game - reminds me of those old "spelunker"-type games that people have made a million clones of. I've always found scrolling-screen kills to be an incredibly existential way to die. To leave the viewer's eye is to cease to be; the only valid concern in all of reality is the individual(s) you are focused on; all player motive forever divested from the motives of the character, who is left to find its own meaning within the confines of its existence; Rosencrantz and Guildenstern are dead. Etc.