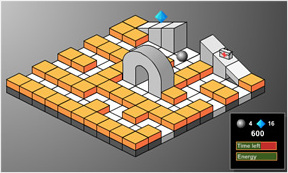 Iso-Infected is an action arcade Flash game created by Thorsten Diessner of Germany. With gameplay similar to the classic arcade sensation, Marble Madness, the object of the game is roll a ball around to collect all 15 blue gems hidden throughout the many areas of the game 'world'. Doing so unlocks the gate to the final 'boss' areas.

Control is with any directional keys of your choosing. Simply click on the controls of the main game screen to begin selecting the keys you prefer to use for each of the four (4) directions: north-east, south-west, north-west, and south-east. In a 3D iso-metric perspective game such as this, movement is generally restricted to diagonals. This is because instead of squares, the tiles of these 'worlds' are made up of diamonds. It seems a bit awkward to get used to at first, but once you find a set of keys that is comfortable for you, it will become easier the more you practice.

The game world consists of ramps, channels, bridges, jumps, and a variety of special blocks that function in unique ways. For example, there is a block that turns like a fan, which makes the ball float up to a higher level. There are also blocks with an arrow that constantly switches direction. These blocks will cause the ball to roll over it in the direction the arrow is pointing at the time.

Like Marble Madness, there are generally no guard rails in the game that protect the ball from falling off any of the ledges. If you fall too far, your energy is reduced for the current ball. Medi-kit power-ups are hidden throughout the multiple areas of the game for replenishing ball energy. If the energy becomes depleted, you will lose the current ball and must start a new one. You have only five (5) balls with which to complete the game.

Discovering how to get to each of the 15 gems is a puzzle within itself, as many of the various channels and ledges cross area boundaries thus making it a challenge to find the correct paths.

And if all that weren't enough to make the game difficult, the author has implemented a timer that counts down from the second you begin the game. Collecting blue gems awards you additional time, so you will need to be consistent in your progress to make it to the end.

Analysis: I've been a fan of Marble Madness since it was released in 1984, and this game provides a similar experience to enjoy. The physics implemention of the game's 3D iso-engine is very nice, the graphics are very pretty, and the controls are tight. It looks and feels good to play. The timer mechanism is a little annoying, and it will surely frustrate those without exceptional coordination skills. Also, the game does not save your control configuration, and having to re-enter your preferences for each new game becomes tiresome. Still, there's a lot of great casual gameplay packed into this lightweight game, and it will surely please even the more discerning gamer.

With thanks to Josh for the link. =)

Woo.. that was fun. The transparenty maze level was particularly annoying.

Been visiting here for a while, and as ever another great little game.. Seems to draw very heavily on Spindizzy, which in itself was a marble madness clone.. thats no bad thing though

Hm... I can't quite figure out how to get the last 7 gems. I got the first 15 to unlock the ever confusing transparent maze but can't figure out where to go from there.

They started to run out of ideas for the roller coaster level... I just felt it was unnecessary because if you can reach that far, you can breeze by it like I did. Still, I loved it. Great game!

Wahoo, made the high scores list (just barely)! With a bit of practice, it gets really easy. I wish there were more levels.

for some reason I can't load it,when i try to click the link the "Try Again Later" screen,and once when it actually worked,it stoped load at 50 megabites/gigabites,forgot which one it was,please help

P.S. No Prob for the link ;),my name is Josh too,What a coincedence(probably spelled wrong)

fyi it was kilobytes

This is very similar to an obscure game that I used to play as a kid, called "Airball" (http://free-game-downloads.mosw.com/abandonware/pc/adventure/action_f/airball.html). The gem collection, the layout, the time limit (in airball you were constantly deflating and had to find pumps spread throughout the game), the controls are all exactly the same.

I LOVED that game. Thank you for showcasing this one!

I love this game. The best of all the flash iso ball games I have played... ahhhh spin dizzy on the specy.

Very much in theme for the current comp. Lets see if anything is better.

Hey that was pretty awesome. Sadly i suck at the game x)