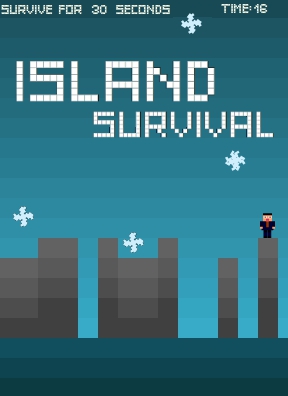 Island Survival is sadistic. There's no other word that better describes styxtwo's avoidance-style survival platformer-like game. If you were to look at any other game that involved shipwrecked businessman and deserted islands, you'd see something that hints of hope; food, shelter, weapons, the ability to do something other than hop helplessly from one decaying column to another. Island Survival doesn't give you hope. Island Survival gives you goals like, 'Survive for 30 seconds'. Sound simple? It is. Sound easy? It isn't.

Using the [arrow] keys, you will lead the blocky, pixelated protoganist through twelve fearsome levels; a task easier said than done. Each stage consists of you being dumped onto an island and being told to survive for a certain amount of time. Unlike many other games, what stands between you and success are not hostile enemies but the very landscape itself; bits and pieces of your island will constantly disappear under you, initiating occasionally hectic platformer moments. Asides from your own dexterity, the only things keeping you from certain doom are the snowflakes that randomly fall from the sky. Whenever you catch a snowflake, the island will automatically generate an additional layer to keep you from the ocean depths; it feels almost like a case of reverse-Tetris in some ways.

Depending on your skill level, Island Survival can be anything from a pleasant diversion to a strangely addictive source of frustration. Seeing as how I've never been known for my platforming skills, I found it somewhere between the two. There's something oddly zen about Island Survival, however, and it's pretty easy to have a good twenty minutes sucked away before you even think about going, 'What the heck am I doing here?': the hallmark of any good soul-sucking casual game.

Doesn't even seem that hard to me, it's just frustratingly luck-basked. Like level 10: there's literally nothing you can do but just keep jumping around. Admittedly, there is a small amount of strategy there (keep on two blocks at once, so if one disappears you don't die instantly), but other than that and some slight amount of avoiding it's pretty much just try it again until you don't die instantly. Fun game, but less "screw you" levels would be nice.

Played this before, and after playing for a few minutes now, I recall why I left it without finishing the first time.

99% luck based game. Some tries, I had every snowflake land way out on the edges of the screen. It's not frustrating in the standard jumper(meatboy) style, where you keep doing one jump to get it perfect. It's just frustrating in a "Why are things spawning where it isn't possible to get them" way.

I agree that randomness is a problem, but I think this deserves some credit for the minimalist style and sound.

I had also played this before, and I agree...it seems to place an inordinate amount of emphasis on luck. It could actually stand to be much more difficult if the snowflake drops weren't randomized every time.

Got through about 10 levels, had to quit. Came back and my progress had reset. :(

Okay, not to beat a dead pixelated horse, but I have to agree with everyone on the skill vs. luck ratio here. I gave (what I assume was) the last level about a hundred tries. Several times, all the ice was gone in less than ten seconds, and not a single snowflake even got close to the ice but fell down too far for me to reach even from the edge.

It looks and sounds nice, but that doesn't make it a game.

That little square dude needs to invest in a boat. Who knew global warming would have this affect?

I finally beat the last level. I agree with the other comments about the gameplay, but the navigation for the menu is pretty neat.

I was really impressed with the idea to begin with. I don't think it went the right way though. *sigh*

not my usual thing, was kinda fun til lv11 just seemed impossible flakes too fast and hardly ever over small island, cba really

I just don't have the patience to beat the final level. I only even tried more than a few times because I was riding the high off the previous level. Nice idea, but broken in the end.

I found this game a good time-waster, but every time I go back to it I have to start from the beginning. Anyone else with the same issue?

@Nautilus199- Same here. My window shut when I was on the 12th level and after that I quit because it was too much of a pain to do it all over again.