Ishara: Bane of the Sea

Ishara's tale is one of tragedy... a family betrayal, a lover brought to violence, and finally ending with Ishara's death in the icy waters which are haunted and cursed to this day by her weeping. So why would anyone take on the name of the legendary sea witch? In Happy Backwards' free indie visual novel, Ishara: Bane of the Sea, you play as a former noblewoman who has been tossed aside by her family. She decides to start her life anew as a pirate, christening herself as Ishara. But first she must go back to the family that discarded her and take what they had promised her long ago... a vessel fine enough to call her own. But things are never easy for Ishara and after a confrontation with real pirates Ishara must save her ship along side her twin sister Cendre or her sister's fiance Felix. With four endings and two main branches of storyline you decide... is there is romance blooming, if a broken family can be repaired, or if Ishara has a different adventure drawn out for her. You know, in between fighting for your life in this action adventure narrative. 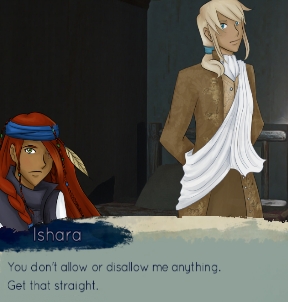 Ishara: Bane of the Sea is played like most visual novels, reading the story and choosing your pathway when the option appears on the screen. There is a great "Back" button that lets you reread dialog if you happen to click too fast and plenty of beautifully done backdrops and scenes. But there are also mini battles that give a break to all the reading. Though you can have up to a party of four, only one gets to attack each turn. Attacking costs action points, varying depending on the move, but for those who didn't attack they gain another point to use next round. You have to plan things carefully, making sure you survive till the needed skill has enough AP, but in addition to that you also have to watch who gets the final blow, as they will get bonus AP for their next fight. The hard part about that is the enemies health isn't visible so you have to guess how close to death they are. If fighting isn't really your thing and you just want a good tale, then Happy Backwards has your back. There is an 'off' switch for fights in the menu. But you'll miss out on some clever voice acting as there are a few line uttered before and after battle. They are not 'important' per se, but they do fit with the story and aren't just repeated over and over apart from voiced attacks. It adds a level of charm to this already delightful game.

There are three perspectives of the story you get to see... Ishara's, of course, but also her sister's and Felix's, who is betrothed to Ishara's mirror image. Early in the game (though after the long-ish prologue) a single choice dramatically changes the story. Ishara is thrown together with Cendre or Felix. While the plot heads the same way the tale of the story is vastly different. It is two unique, but connected, adventures and each story line holds different information to their pasts. You can clearly tell that Happy Backwards put a lot of work into it, even if there are a few spelling and grammar errors. There is also one spot in both story lines where Felix and Cendre are said to be with you even if they aren't. But besides the one line of dialog everything is how it should be. ...And there is one more slight issue as of this writing. You can only load from the main menu. If you try it while in the middle of the tale, it will send you to a crash screen, but you can get back to where you were by clicking "rollback". BUT don't pass on it just yet! Ishara: Bane of the Sea was made in just one month for NaNoRenO. And it is far beyond what should be expected for a game made in that short amount of time. The characters feel real, the dialog doesn't feel forced, the music and voice acting is spot on. Also there may be a patch coming out soon to fix the few spelling errors and the other minor issue but even with its flaws this is one of the better visual novels. Give it a chance. You won't be disappointed.