When your sister, Bubble, falls ill, it's up to you to go seek out the only cure that is lost in a deep mine. Why you and you alone? Well, you're pretty darn good at cat puns and that's what every true neko hero needs. Iridescent by Osias Bantug, Kristoffer Lirazan, and Nicecream, is a platform game that dabbles a bit with puzzles and action. Your goal is to simply get to the door that leads to the next area, and all you have with you is your slingshot and trusty aim. You shot glowing gems, or spectrite stones, that are found laying around, but the gems only interact with things that are glowing the same color. Moving over a stone, with the [arrow] or [WASD] keys (and pressing [shift] lets you dash a short distance), you automatically pick it up as long as you're not holding anything else. Later when you find the statue of the goddess, Catnella, you can have the spectrite stones blessed by pressing [E] (controls can be seen in game by pressing [TAB]). When the blessed gem is shot, by holding down the left mouse button to build power, it activates its special ability. While most of the time the stones are for activating buttons and so forth, there are enemies along the way that sadly can't be hurt by your purrfect puns, but are less keen to rocks in the face. 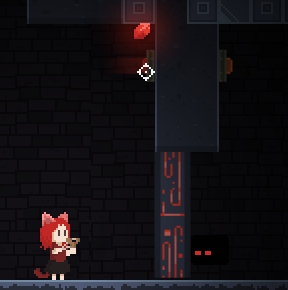 Iridescent was made for the stenciljam2015, but it's a pretty well polished game with a full story and with a good length that has you satisfied, but not bored. Not all the levels are headscratchers, but they don't have you just firing at anything in sight either. The levels are short so you get a good mix of both puzzles and action, even though nothing is overly challenging. It's a cute playthrough with a charming atmosphere that is only missing a few things, like a save, though the game is short enough you can finish in one sitting anyway, so missing that isn't soul crushing. One of the other things that seems a little off is how long it takes you to realize you're dead. With the one-hit kill set up, you can accidentally nudge, say, a bat, and go for about half a second more before you fade out, giving you a false sense of hope that you survived. But most of the levels are small enough restarting isn't that big of deal. This is one lovely adventure that you can relax and appreciate the beautiful art work, get a good chuckle or two out of and just simply enjoy.

@Programmer
It's bad practice to not show all key/button explanations somewhere.

@JAY
Because of above you missed SHIFT for "temp boost".

(For all we know there could be hundreds of more functions).

The control on this game is very weird, at least on my computer. It's not very responsive. Also, I played from somewhere else that doesn't handily give controls in the review, the game didn't show them in game, and I was very confused as to how to hit a button I could jump to or why I was picking up gems. Otherwise would be a very fun game, but I couldn't move my character very well because of the previously stated unresponsiveness on my computer.

@Tobberin
My apologize. I missed this because when I played it I actually never used the temp boost and was able to get through it just fine. But I'll add this in.
Besides the common [p] for pause and [m] for mute, you can actually hit [TAB] to see the controls, something I missed the first time too =/

Even though it's a practically useless function, that's definitely the best "pause" menu I've seen in a while.

TAB?.. they really should have used the Konami code.

How do you get past the first door?

I managed to complete the game without knowing about [SHIFT], [TAB], [P], or [M]. The "Settings" gear leading to a "Retry" looped-arrow was fortunately obvious, but could have used a "?" icon which did what [TAB] does.

Dashing wouldn't have been helpful for anything but convenience with long hallways, though - no platforming/doors required it, and the monsters (and boss) were slow-paced enough to leisurely walk away from and/or normal-jump over. The primary challenge with the boss was to avoid shots that were too low to walk under (no ducking!) AND too high to jump over safely, which needed a bit of strategy with using the lower areas as cover without being trapped by a low swoop. This could still be accomplished (with a few retries) without dashing.

This is still pretty good for a five-day contest entry...BUT. This is "polished" as in "shiny, pretty, charming, creative, and lacking obvious bugs", but not as in "complete" or "well-tested", sadly. In addition to de-obfuscating the key bindings, the dashing should either be removed as superfluous, or more platforming puzzles/creature behaviour added which would make dashing necessary.

All in all, I feel this is clearly good enough in concept AND presentation to deserve being worked on further.

@R.j. Ferraresi
For the first level.

Just walk over the stone to pick it up. Then using the mouse aim and shoot at the red button that is up by the door (kind of in the dark). Then you just move to the door and walk over it till it sucks you in =)