Klei Entertainment gets swanky, stealthy, and strategic with Invisible, Inc, a turn-based indie game of espionage and skullduggery with tons of customisation and randomized maps. As the game opens, your headquarters came under attack, slaying several of your top secret agents and scattering most of the others, with you barely managing to escape with Incognita, your advanced AI, but she won't last long on backup power, and the corporations that did this to you are still looking, and would love to get you inside one of their deprogramming rooms. You've only got a few days to do what you can to amass allies, supplies, and defenses before you need to bring the fight to them, and the clock is ticking with every mission you undertake. Don't like any of the difficulties available? Create your own! Invisible, Inc comes with a remarkably complex set of options that allows you to change everything from the way the alarms work, to guard patrols, and much, much more, allowing you to make the game as easy, or as brutally difficult, as you like. Now, assign yourself a proper spy codename. May I suggest... Duchess? 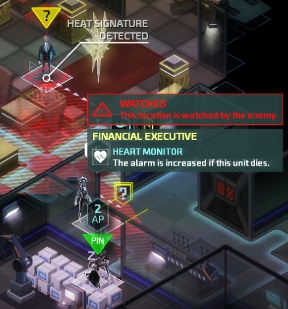 The tutorial mission will walk you through the basics, but Invisible, Inc plays very much like X-COM: Enemy Unknown, only with less explosions and alien gas. When it's your turn to move, each agent under your control has a set number of ability points they can use for everything from walking to interacting with their environment. This isn't a game about going in guns blazing, so your goal is always to do things as quietly as possible, since the game gets harder as the alarm level in each location increases. You can utilize cover to sneak by guards, or come up behind unarmored foes to knock them out temporarily, allowing you to rifle through their belongings or drag their bodies elsewhere so they aren't discovered. Incognita can help as well, and by hitting the [spacebar], you can hack whatever you have the power to spend for, allowing her to open doors for you, turn off cameras, decrypt consoles for your use, and more. All of this is a rather simplified explanation, since the game has a lot more complex mechanics, like allowing you to pin a downed enemy, soldiers that are equipped with heart rate monitors to raise an alarm if they're killed, setting up ambushes, using augments on your agents, and much, much more. Each mission has a set objective to complete, apart from getting out alive of course, but you'll usually find optional safes to hack and more along the way. Survive, and you'll be able to upgrade your agents with new abilities and equipment, but once they're dead, they're gone for good... at least until your next campaign, anyway. Your safest bet is to be as silent and invisible as possible... hey, it's right there in the title! If you are forced to take an enemy down, you might want to drag their body off where they won't be spotted by other patrols. Do you want alerts sent to highly advanced attack drones? Because that's how you get alerts sent to highly advanced attack drones. 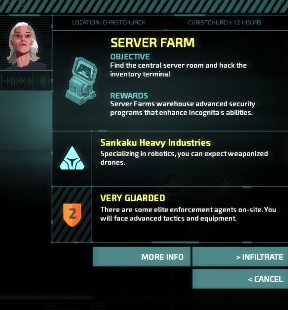 If all your agents are dead or you're simply stuck in an unwinnable situation because you made a bad call, well, it's a game over, sure, but also a new beginning. When your agency retires, you're granted experience based on how well you did, which in turn unlocks everything from new agents to use and more items. Because all the levels are procedurally generated, the challenge is always fresh, and hey, you can always tweak the settings before you start again if you find yourself having trouble with a particular mechanic. As a result, Invisible, Inc is an endless parade of spy hijinks, and all of it customiseable to your skill or comfort level. By default, it's an extremely challenging game, making it the sort of turn-based title that's just as tense as any realtime game. Every move needs to be carefully considered, every corner regarded as a threat, and you'll want to plan ahead for anything, since a single wrong move can bring a whole mess of trouble down on your agents. With a few tweaks of the game's extremely generous difficult settings, however, you can easily adapt the game to your playstyle. It's a wonderful concession to the audience for the developer to make, especially considering you can make things even more challenging if you please. The game's focus on stealth means that while you can resort to violence if you're in a tight place, slipping in and out of a mission like a ghost is infinitely more rewarding. The controls and mechanics are simple enough that your typical strategy fan will pick them up immediately, but with enough depth that you'll be required to be flexible yourself in order to adapt to any threats or wrinkles the game throws at you. The default settings are fairly demanding, so every turn and ability point counts, especially with "rewinds" in limited supply. And Ironman mode? That's where the real Danger Zone is. 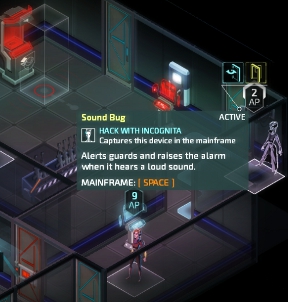 What Invisible, Inc doesn't have, sadly, is much of a story to speak of, with its exciting and beautifully executed opening cutscene mostly there to give you an excuse to be all espionage-y. It's a shame, because the characters that make up your agency are seriously cool, like hacker Banks, whose experimental cerebral implants left her able to make short work of most any electronics but fried much of her brain, or tough guy Decker, who spends his time at the bottom of a bottle and wraps himself in the trappings of a bygone era. These are characters you wish you could get to know, and the way so many of their descriptions almost imply they should have character arcs or interactions winds up stinging more than if they had been the randomly generated squadrons of X-Com: Enemy Unknown. While its story might be light, however, the game and presentation itself definitely is not. Invisible, Inc's gorgeous style and tone creates such a fantastic mood that it's easy to get lost in it. It's packed with replayability, or even the option to make the game you're playing endless, giving you a whole lot of bang for your buck. If you love turn-based strategy, Invisible, Inc is an absolute gem, one that rewards planning and cunning over brute force, and with Klei Entertainment's signature stamp of stunning quality of design, it's a game you will definitely want to check out... bring your own tactical turtleneck, and leave the rampaging at home.