All I wanna do, is fight some soldiers wearing blue, with a giant army! (A giant army!) All I wanna do, is upgrade my units too, in a giant army! (A giant army!) Aleksy Severinov and Kirill Koshurnikov's Invasion is a real-time strategy defense game where you drag and drop your teeny-teeny planetary defenders around the grid-like battlefield on each level to contend with the incoming waves of enemy soldiers. Just click and drag any unit anywhere on the field to put them to work, though of course different units are more useful in some situations than others. The Archer, for instance, whose motto according to the army management screen is "deadly arrows from the sky" (also weirdly enough my accountant's motto... I worry about that guy) is best suited to pluck away at an enemy's health at a distance, with units like the swordsman acting as meat shields up front. Survive a level, and you'll earn skill points you can use to upgrade each unit's skills and abilities, though you can only take four unit types into battle, so choose carefully... especially since once a unit is wiped out in battle, it's gone for good until you restart! 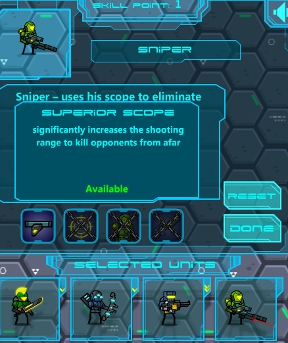 There's no real context for Invasion given, which is maybe a good thing, since given the setting and the way you scoot around to various planets, it sort of seems like you're the bad guy, just storming in and blasting everything up. Assuming that sits well with you (hey, I'm sure all those planets are total jerks), then Invasion is a solid little defense game that will keep you moving and thinking fast to react with the different threats in each level. There's a very Plants vs Zombies-esque feel to the grid-based enemy advancement and the different unit types, and the difficulty ramps up significantly after the first few stages. Where the problem lies is that Invasion feels so chaotic that trackpad users might find it impossible to be dragging units around fast enough, and there's no real reason there couldn't be some sort of "hotkeys for units, click to select destination" control scheme to streamline things. Likewise, having a unit display their range when selected, or an indication of how you're graded for levels, would also make the game feel a little more user-friendly. Still, the simple presentation works well, and the boss stages add some surprising extra challenge with their unique abilities, though unless you're particularly quick you might run out of units before they even appear. If you prefer your defensive strategy games slower and more methodical, Invasion might not be the game for you, but if you idea of commanding an army involves shrieking incoherent orders into a microphone while your units are slowly overwhelmed, it's probably got your back.