What's a demon to do when the end of the shift is nearing and they haven't yet met their daily quota of stolen human souls? Fruit just isn't the temptation it used to be, and going down to Georgia is way too risky. Oh, and there happens to be a dangerous human wizard on the loose who wants to make your life He... erm... Heaven. But one small demon, specifically the one starring in Olip's Inner Demon: Soul Trader, is ready to become the villain Pandemonium deserves by possessing as many people as people as possible. In puzzle game fashion, no less. Mwahahaha. In fact, he's not merely content to tackle one type of puzzle; his delightfully dark adventure will see him both skidding around the room in a sliding block fashion when he's his demony self, and pushing objects in a more controlled, Sokoban-like manner when he's possessing some poor slob. Just use the [arrow] keys to make him zip along the floor until he hits something; preferably a tasty human. Once you've captured a terrified victim, you can walk them back to your portal to Hell in a more controlled fashion... if you don't need them to gather gems, push buttons, and break floors for you first. You'll have to combine you speedy sliding skills and your human-manipulating prowess to reach that wizard king and make things safe for demonkind! It's a simple idea, and it's the kind that works so nicely (or evilly) you have to wonder what took the world so long. 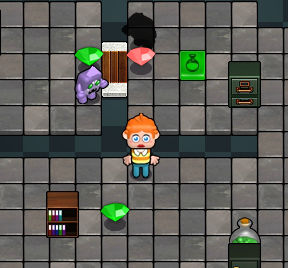 The combination of gameplay types is really what makes Inner Demon stick out among the sliding-block crowd. Figuring out how to get the demon where you want him is rarely tricky, and the puzzles you do in human bodies are usually not much more complicated than shoving the right kind of block a few spaces over. But going from one style to another is fast and seamless, and the game gives both forms enough distinct gimmicks that only they can interact with, and things only they can do, that you really do need to utilize both well to get from level to level. Not only are the levels well-designed, the difficulty is also just about perfect. You can't just push keys randomly and attempt to stumble into the solutions... there are enough deadly obstacles to see to that. But none of the stages are truly brutal, and even the most challenging are generally a matter of figuring out the right order to perform certain actions in. The stages do have timers associated with them, but letting time runs out only makes the green, collectible gems vanish from the stage. While gems are needed to unlock new levels, you don't need many to actually progress, and it's quite simple to walk over to them and grab them in human form. This gives the game a leisurely, forgiving feeling, and encourages you not to stress out over it. And it's all topped off with a cute, blocky, psuedo-3D visual style. The twists Inner Demon puts on its classic formula make it accessible even to those who don't normally like pure sliding-block or Sokoban-style puzzles, and c'mon... it's a game about stealing souls! How can you go wrong with such a ghoulish sense of humor?

Engaging, fun game. It would have been more enjoyable for me were there no clocks to beat, but I always choose 'casual' if it's an option.

Thanks a lot for the review Ally! I released a second version that's a little more strict in terms of time given to collect gems, hopefully its more challenging but still retains the casual stress-free feel.
Olip :-)