Something is very wrong. There is an energy of unknown origin and intent seeping into our world. It is known as Exotic Matter. The world is a much stranger place than you'd think. Particles of energy float invisibly through the ether that can only be seen with the proper app on your portable device. Now iOS users can learn what Android folks have known for a while now. An Ingress is in progress and the future of mankind is unclear. Is it a wildly popular and engaging massively multiplayer online adventure or is it an actual conspiracy that spans the globe? Only you can decide. Ingress uses Google Maps, Google Earth, and the GPS in your device to show the local area overlayed with the ubiquitous energies and portals. Travel to portals located at local landmarks and places of interest, and attempt to either capture (if it is in the hands of the enemy) or protect the portal. Once you've downloaded the app it will walk you through a series of tutorial missions exposing the hidden secrets that permeate the landscape. 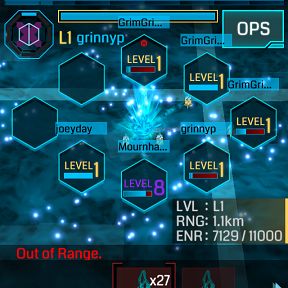 Although a person can just have fun using Ingress to explore their local neighborhood, real progress in the game requires teamwork with others in your faction. You can post your own activities or contact other players through the built-in communicator. Created by Niantic Labs, Ingress is, at its heart, a game of movement and teamwork. Portals are leaking the Exotic Matter (XM for short) and possibly contaminating our world. All you need to do is decide where you stand. Do you want to harness this amazing energy source to help mankind evolve to a better place? Or do you wish to contain the stuff at all costs, maintaining humanity's freedom from outside influences? Enlightenment or Resistance, make the choice and join the fight.

Most of the amusement with Ingress is the exploration, both within the game and in the surrounding scenery. The gameplay can be a little thin. Simply explore in real life, find a portal, hack, pick up inventory, deploy items, rinse, repeat. This doesn't take away from the entertainment that Ingress can provide, however. Despite the paucity of actual "gameplay" Ingress is curiously addictive, causing the player to want to keep going just a little longer to see what the next portal reveals. Immerse yourself in the hidden world or simply use the game as an excuse to get that exercise your doctor has been nagging you about, the level of participation is up to you, dear reader, which is one of the main appeals. So join the Revolution! Or the Enlightenment. No, seriously, join the Revolution, don't trust the Enlightenment!

Anyone in the Denver area?

It only took 8 more levels for iOS devices to be added (we're at 16 for a max level now). Also, there is no use of Google Earth. Google Maps is used at the lowest level (basically streets and bodies of water, with little detail) with portals using photos taken by agents/players. The game is derived from the book series. Please do better research before writing a review.

grinnyp! good to see you. miss you from escape games.