InFlux from Impromptu Games is a puzzle adventure game starring a shiny little orb-like protagonist. This orb has but a few basic powers at its disposal, but somehow it manages to solve all sorts of puzzles as it makes its way across forest and through puzzle rooms. InFlux is a straightforward third person puzzle game. No strange pretenses, no strange gimmicks, just some genuinely challenging puzzles that will get your head churning. 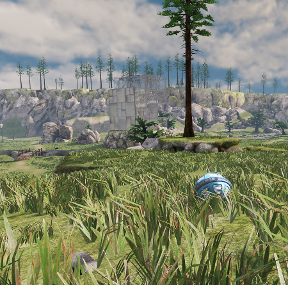 Here's how things work in InFlux. Rolling around as said orb, you have two basic abilities you'll use to manipulate objects in the world: push away, and pull towards. By repelling and attracting certain objects (usually outlined with a fine blue aura), you can clear paths and move things around. Just think of it as the mystical powers you had at your senior prom, only if you're like us, without the "attract" ability.

You'll roll through beautiful natural landscapes in InFlux, serving as a slightly more actioney portion of the game. Here, you'll find the charge and dash ability comes in handy, and your attract and repel powers are mostly useful for nudging boulders out of the way or pulling doors open. Reach the end of a nature section and you'll find yourself in an abstract test chamber of sorts. Here, puzzles are far more intricate. You'll often need to rotate the entire level by weighing down blue buttons, all with the goal of getting a glowing marble to an out-of-the-way goal. 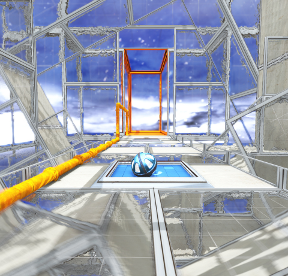 Analysis: If it helps, think of InFlux as kind of a blending of Q.U.B.E. and The Ball, only just the most basic style elements of those games. Really, InFlux is far more zen in design, opting for straightforward puzzles with a light sprinkling of action and story elements. The result is a much different feeling while you're playing the game. You won't feel rushed and you won't feel frustrated, you'll just have a furrowed brow as take in the sights and wonder how the heck you're gonna do what you need to do.

A suitable amount of intrigue also drives InFlux into your subconscious. The game starts with little fanfare, just dropping you into things and nudging your little orb self into the wild. You slowly start to encounter things like the glass houses and suspicious constructions in nature, all without a single living creature in sight. HMMMMMM. Your imagination can really get carried away, but man nor woman shall fault a game for stirring the inner muse from time to time.

The only real downside to InFlux is that it doesn't have that "shine" that makes it stand out and get attention. Casual indie gamers could easily pass it over if they just glance at it sidelong. It's their loss, of course, but it means the game might not attract the audience it really deserves.

If you're in the mood for a little quiet puzzle solving, InFlux is the place to go. It's an extremely satisfying game that will have you mesmerized from the moment your little metal sphere falls from the sky.