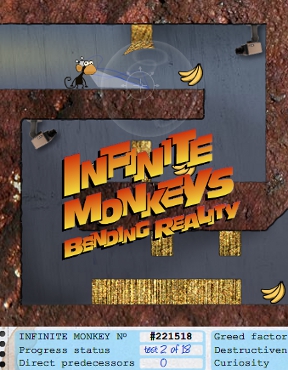 Are infinite monkeys tapping at typewriters the best things going? They can do everything. First the works of Shakespeare, and now this puzzle platforming game, Infinite Monkeys Bending Reality. Oh sure, deeper beige claims the credit, but I don't think that's fair if you have infinite monkeys to do your work for you. Who knew that a bunch of simians could create a game that depicts one of their number being cruelly experimented upon, forced to use a reality-bending helmet to manipulate his environment to avoid being killed? Actually, that seems like a fairly natural fit for a monkey. I guess monkeys are into escapist fiction as much as anyone else.

Use either [WASD] or [arrow] keys to move your furry friend around the level, and use the mouse to aim and shoot your reality-bending ray. Pretty simple mechanics, really. There are 18 regular levels, but if you're particularly sneaky, you might be able to find some other path. There are four endings to the game altogether. You can also get various achievements, such as for being "greedy" by collecting all of the bananas.

The game has outstanding art and production values in general, from the goofy little animations of the monkey to the mechanical arm that drags the monkey in at the start to the "madcap mayhem" music to the backgrounds, especially in some of the secret areas. It would be nice if the game allowed you to save your progress mid-game instead of forcing you to play straight through, but luckily each individual ending doesn't take that long to reach, and you do save your achievements progress over time. You'll just have to set aside a chunk of time to focus on this game. Get some infinite monkeys to do your other work. How do you think I manage to create such great reviews for JIG?

Do the creators of this game realize that this game is really hard on the laptop? Or at least the hard path.

I don't think so unfortunately, but maybe you could buy a USB mouse.

I made it to

a giant Easter egg, underneath the first two-laser room, on the right path of the sewer. I'm not quite sure if there's anything there, but I can't seem to get back into the room above.

I found it impossible with a touchpad, so I played it at work with a real mouse and still found it impossible albeit for different reasons related to the randomness of how bubbles affect things combined with the slowdown/glitchiness I encountered on the work computer that wasn't present on my gaming laptop.

Kudos for the creative game, it just happens to be unplayable for me.

did you know that

while the options menu is open, the monkey is invincible?

that certain obstacles still move, even though the game's suppoused to be paused?

@Tenzhi: Once you play for a bit, you get a feel for how the bubble affects the screen. It has the same effect as a fish eye lens: things stretch in the center and get crushed toward the edges.

There are four endings and it's getting tedious because it restarts everytime you end.

Choose to clone yourself (bad ending) for more testing I tried freedom but only managed to escape the deathtrap the way I came in.

I gave this one 4/5 on Kongregate. It was creative and fun once you got the hang of it. A degree of hand-holding almost all the way through it though. Also, the physics felt a bit sluggish, like the monkey moves through oil, but I can't really complain about that in a game about bending reality, can I?

Worth a look, at least.