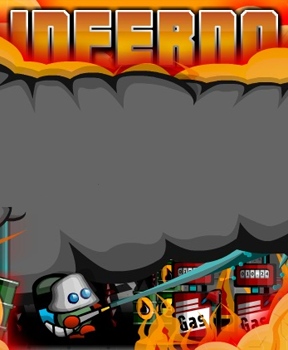 Fighting fires is a dangerous business, so the idea of sending in robots to do the work instead is definitely an appealing one. But for some reason someone thought one robot would be enough, which is where you find yourself in Inferno, a puzzle/platform game where keeping the fire at bay is a matter of speed, guile, planing... and coins.

Inferno controls quite easily: you use the [WASD] keys (or directional [arrows] if you are left-handed) to move the little robot and your mouse to aim his water spray. The objective is to stop all the fires on a level, with the secondary aim to grab the coins. Coins are important, because they let you upgrade your abilities: speed, health, tank capacity and jet power. You will need all of these, because fire is one nasty piece of work.

"It's a living thing, Brian. It breathes, it eats, and it hates. The only way to beat it is to think like it." So said Robert De Niro's character Donald Rimgale in the 1991 movie Backdraft. Honestly, it's as if he played this game too! The puzzle part of Inferno is keeping the fire under control, which is not easy given fire's habit of spreading. Each square that catches alight has three stages; one to three flames. The more flames, the more water you need. The fire also spreads to surrounding blocks and left long enough will damage the block completely. This can disable ladders, make areas inaccessible and even bring the roof down (spreading more flames to whatever it ands on).

Some blocks are more flammable than others. Books and hay will light up far more happily than wooden walls, but its the volatile substances that are the bane of our little robot's job. Oil drums will explode, spreading flames over a random radius. Fireworks boxes turn into flame-raining mortar positions. And nuclear waste... well, just keep the flames away from those (actually they are not much more volatile than oil; fireworks - now those are a nightmare). 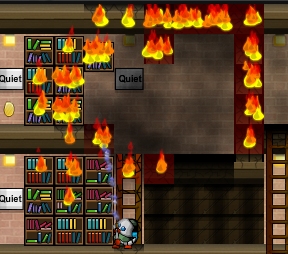 Analysis: The challenge in Inferno is figuring out how to contain a fire and eventually extinguish it. Keeping flames away from volatile substances is the obvious route, but some levels will expect you to focus more on containment than immediate avoidance. Your water can run out and an out-of-control blaze will soon become impossible to stop if you don't manage your water use or stage time refills. If that is not enough, you need those coins. There is no other way to upgrade and advancing your gear is vital if you intend to keep the house from burning down.

Inferno isn't perfect. The control system is a bit stiff, which doesn't blend well with such a high-pressure theme, and if you reload the game you can access the levels you have unlocked, but you lose all your upgrades. Also, you can't actually lose (unless you die). Letting a fire burn out on its own just costs you score, not the level. Yet despite these setbacks it's addictive and extremely satisfying when you beat back a wall of flames. As fun as it is frustrating, Inferno spreads itself over more than a dozen pyro-induced interesting levels. Give it a bash - you'll find the robotic firefighter in you yet. Who knows? There might even be a kitten rescue or two in your future.

Clunky controls is right, and losing your upgrades is the deal-breaker. Also spent a lot of time trying to replenish lives with the first-aid kits in the office- I guess they're just window-dressing?

WARNING!!!!!
A menu visit removes all your upgrades and gold! (Only lev. progress is kept).

Was halfway through.. don't want to restart.
BIG - on game score.

Quite fun, but there were a few levels where the designer overestimated how fast a fire would spread. The Fireworks Factory and Matches Factory were both over in seconds because I snuffed out the fire before it reached the huge explosive stockpile.

The easiest way to win is to focus on containing the fire before killing it. This usually doesn't even cost you much score, because you can contain it to the area where the fire started, which is probably toast no matter what you do. Once something burns to ash, it creates a firebreak. On "House Fire", where reaching both sides of the fire requires you to run a lap around the house, I won by letting the stairs burn through so I could walk through them.

Ug, browser crash halfway through the game, an now all of my upgrades are gone! I hope this is something the developer corrects

Aha. If you think it's too easy, try playing without upgrades. In particular, without the Jet upgrade, which extends your range. The game is much tougher when you have to get up close and personal with a fire, and it's hard to put out a fire on the ceiling when your hose won't reach.

Contrary to the review you can lose several levels if a certain object burns... Fire Breaks FTW!

[Most likely a browser extension conflict. You might try disabling the extensions until you find what's causing it. -Jay]

Does anyone know what the music that plays over the menu is? It sounds oddly familiar.

What this really needs is a level editor

For an added challenge, try completing it beginning to end with not just no upgrades, but collecting as few coins as possible. I collected three, in the Oil Rig, Thatched Cottage and Fireworks Factoryshop levels. Can anyone do better?

Anon - it reminds me of Castle Crashers. But I don't think that's what it is.

I think it's amusing that Bored.com has this filed under Games >> Fun. So, Bored, does that mean you have a Games >> Not Fun directory? :p

Just to make it clear, the reason that upgrades don't stay when you go to the menu is because designer didn't want you to go back to the first levels with max upgrades and get a higher score than possible without upgrades to submit. I still don't agree with the idea though. Once I went back to the menu and came back to find my upgrades gone. after that it froze and I had to start over again.

The menu music sounded familiar to me too. It's not from castle crashers, it's the same menu music from a game called "dragon boy".

Jay, can you link to the bored.com version instead?

The one hosted on your servers stops working after a certain number of levels and says you have to play on bored.com instead to play the level.

I played through all those levels only to find that out and lose my progress.

[Sorry that happened to you, but that didn't used to happen. Why don't you complain to Bored about that kind of shenanigans? We most likely won't be featuring any more games from them if they continue to resort to those kind of underhanded, evil tactics. -Jay]

Jay, sorry for the attitude and tone.

Also, my statement was not true: you can play the rest of the game; you are only locked out of a few special levels along the way (not a lot).

Anyways, I noticed that the author's website says that Inferno was sponsored by bored.com. Maybe he had to include that in there so bored.com would sponsor him?