Holiday-themed previews have a long and glorious history in gaming. Santa Jetpack, Christmas Nights, Jazz Jackrabbit Holiday Hare, Moley Christmas... Indeed, the only thing that seems to be missing is an infusion of the those pesky undead. Well, Toge Productions has finally got us covered on that one in Infectonator Survivors: Christmas! While the Infectonator series is best known for its fast-clicking strategy action, this new off-shoot of the series has a much higher quotient of defense and simulation elements to it. Players take command of a crew of survivors that are as ragtag as they are motley. All they want to do is spend the yuletide season not being munched upon by zombies, but sadly,it looks like it's going to be a bilious green Christmas after all. But maybe if they clear enough locations, collect enough supplies, and fuel up that car they've scavenged, they just might make it to new years.

Lead your squad against waves of undead creatures, killing all of them before they permanently kill you off. Tap characters to select them, then drag them to where you wish them to move, or . Each of the four characters in the squad can also be activated with the [1-4] keys. Each character has different weapons, and their range will be indicated by the circle surrounding them as they move. They will attack enemies automatically. Squad members can also be directed to search sparkly on-screen locations for weapons, supplies or cash. Waves of zombies will attack automatically, though you can call them early manually for a cash bonus. Cash can be used to heal members of the squad or construct gun turrets at the sandbag piles on-screen. You can also call in a military strike by clicking the icon in the lower right, though these are limited. In between levels, you will choose missions to collect food supplies, stockpile fuel to load up your escape car, and
search for a route out of the city... 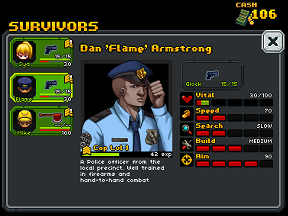 Infectonator Survivors: Christmas is kind of an odd Christmas Duck. There is a mass of content here, some gorgeous graphics (though in one reviewer's opinion, the anime-styled character portraits clash with the 8-bit stylings of the rest of the graphics), intriguing options for customization, cool randomly generated worlds to explore, and the kind of axe-meets-zombie head action that frankly never gets old. On the other hand though, very little of it is sufficiently explained or balanced quite right. There are weapons that clear the screen, and survivors to recruit that are functionally useless, and discovering which is which will involve a lot of error in your trials. In particular, movement seems like it needs an overhaul, as it can be very fidgety when surrounded by surrounded by enemies, exactly the place players won't want it to be.

Perhaps that is intentional on the part of the developer, in presenting the kind of learning curve expected by the rogue-like genre nowadays, but in all honesty, it feels like part of a deal that's being offered by the developers: we'll give you a look at where we are now with a game that looks like it's going to be a big hit, you shoot us some feedback about what can be improved and, in addition, we'll go ahead and put Santa Hats on everything, which, let's face it, will probably seal it for most. But the flaws stemming from lack of polish are balanced by the humor and charm that has been the series' hallmarks. So consider Infectonator Survivors: Christmas a nice early stocking-stuffer. Just know that the real big ticket gift is still on the way.

Too bad, can't play. ArmorGames is no longer a "free flash gaming" website. The GoogleAds YouTube ad in front of every one of their games now, is REQUIRED, with no eventual bypass. And for one such as me, whose work computer has YouTube blocked by the Admins....I am no longer able to "pay" ArmorGames with that ad view, and thus am not allowed to play their games.

So I'll have to skip this one. It's a shame, I like Infectionator games, and this looks like a good one. Oh well.

Hmm. Dunno what the problem was. I clicked on the link provided at work which has youtube blocked. No Ad, nothing. It went right to it.

It will likely come out on kongregate or a hack flash game site.