Six year old Theresa and her twin sister were the first to catch the virus. Theresa survived. Her sister didn't. Now, with people dead or dying and the city both evacuated and quarantined, the only hope for a cure might lie in finding the missing little girl who started it all in the plague-ridden town... provided you can avoid being horribly murdered by the menacing, masked hulk of a man who wants to find Theresa for his own ends. And you're alone, unarmed, and apparently kind of a pencil-neck. So, you know... good luck with that. Gogi Games delivers a remarkably creepy and engrossing hidden-object adventure with a medical thriller storyline in Infected: The Twin Vaccine. Will you be able to find Theresa, your only chance at a cure, before the virus mutates and spreads across the globe? And isn't this a job for virtually anyone else? Wolverine? Rebecca Chambers? Courage the Cowardly Dog?! 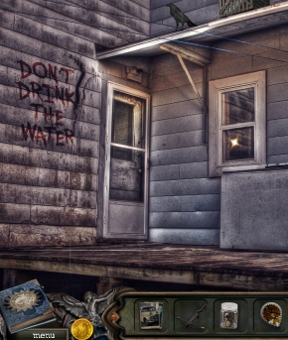 If you're worried about being vastly underqualified and unprepared to conduct an investigation in a hostile environment crawling with disease, don't worry... turns out all you need to know is how to click. Unlike most games of this genre, Infected is fairly unique in that all of its hidden-object scenes are small, contained puzzles. Each item that you're asked to find has a use in that same area, usually to gain access to another, and when you've finally found and unlocked them all, you'll get an item that relates to your quest. If you need a little direction, click the hint button to get pointed towards your next objective, or to find a random object on your list. As an added bonus, the difficulty of the game is customisable, allowing you to tweak how quickly the hint and skip functions recharge in addition to whether you want the tutorial or help text. The end of the world was never so user friendly!

Analysis: Professional-calibre voice acting? A straight-laced medical thriller horror story? Hidden-object scenes that make sense and don't feel like pointless busywork?... Sweet Celestia, am I dead? It's rare to find a casual download game willing to play it straight, when most would rather inject some forced lightness, goofy dialogue, or out of place humour in order to try to appeal to a broader audience. The Twin Vaccine, however, creates a story-driven experience full of tense scenes, plot twists, bloated corpses, and disease-riddled animals. Hooray! On the downside, most of the environments you'll visit tend to be rather drab, if beautifully rendered, but I suppose that's one of the consequences on setting your game in a plague-ridden city quarantine. David Bromstadt probably isn't going to be able to do much for you even if he is willing to get airlifted in, and he's amazing. 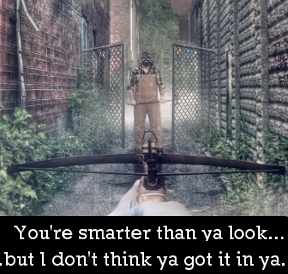 The decision to try to make hidden-object hunting feel like a more carefully considered part of the gameplay rather than a random assortment of junk and time wasting is a welcome one. It's nice to feel like you have a goal and are actually solving mini puzzles instead of mindlessly clicking on pictures, and for the most part, it's integrated very well. The rest of the gameplay is fairly standard stuff, with the usual assortment of bizarre locks and puzzles sprinkled about so that it looks like the Umbrella corporation built everything. Which is, y'know, kind of apt given the subject matter. On the whole, even if you do tweak the difficulty, chances are you'll find the game a bit on the easy side. It's a bit less about using your brain in most cases, and more about being smart enough to use the square peg in the square hole when it's presented.

If you're sick of fantasy and want a casual game that delivers a more serious storyline with a plot more grounded in reality, then Infected: The Twin Vaccine should be a demo you make a date with. The main game will probably run most players around four hours or so, and the bonus chapter, which acts as a sort of prelude, adds another hour or so to that. Despite the short length and comparatively simple gameplay, however, The Twin Vaccine is still easily recommended for its high amount of polish and exciting story that makes for a remarkably engrossing evening's play. Just remember... you have to dunk a few flaming basketballs to make a plague-riddled omelette. Or, uh. Something.

Played the demo and really liked it. I'm not always a huge fan of using actors, but the ones in this game are pretty quality. The story is actually pretty dark, and

at one point there's a corpse. It's not overly graphic, but it came as a surprise since a lot of hidden-object/adventure hybrids tend to be a lot more coy about death and dead bodies.

I'm definitely going to buy it when the regular version comes out.

Bravo!! Loved this game! Up to date story line, real actors (blended into the animation) & logical progression of the game with the story.
Bonus...didn't know till I finished it tonight & watched the (very good) video of the making of the game...that it's a Canadian company using Canadian scenes. Very cool, considering it's Canada Day today!! :)

Wow! I loved this one. It was so nice to see something different both visually and gameplay-wise, and which worked very well. A few things seemed a little far-fetched/contrived but it's really pretty good on the whole. Unlike you Dora, I've actually found it more difficult than most other games I've played -- and I always play in hard mode or whatever it's called-- so it made for a very welcome challenge.
Thanks for the rec!