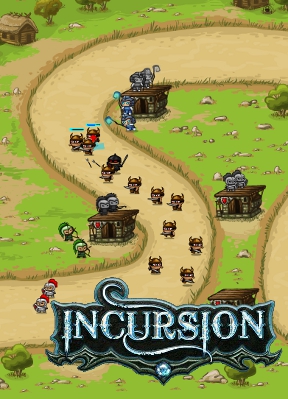 Will evil never learn? Sure, maybe this time you've got wyverns and soulsuckers, but that doesn't mean you will prevail. Because we've got lightning masters and doomhammers. So come on, it's not even going to be a fair fight! Use your wide variety of troops strategically to fight wave after wave of monsters in Incursion, a tower defense game from Booblyc. It's up to you to cleanse the land of this ominous threat!

Imagine Kingdom Rush, but with only barracks to place, and you've got an idea of what to expect from Incursion. These barracks, however, are fully customizable. Use your mouse to place a tower and you'll have three basic types of units at your command: soldiers, archers, and wizards. Up to three units can reside in each of your towers. Any three. It doesn't have to be all of one type. If it suits your strategy to have two wizards and one soldier, go for it! You don't have to fill each barracks, but once you do, you can begin to upgrade the troops housed there. As you progress, an upgrade tree becomes available, giving you even more customization for your strategy. Your wizards can slow enemies or use chain lightning, for example, or archers can upgrade to mortars with splash damage. You earn gems for each level you pass, which allows you to upgrade your army's general stats such as attack range and cost to train.

It's important to select a waylay point for your troops to gather. The nice thing is it doesn't have to be on the road. So you can stick your archers in a beautiful meadow and let them spray their arrows onto the enemies from afar. You can always move the point as strategy demands. There are six different spells that randomly drop from enemies, ranging from freezing the enemy in place to lighting them on fire. These can be very helpful in a pinch, so use them wisely. Each is assigned a hotkey, or you can click them with your mouse.

It's impossible not to compare Incursion to Kingdom Rush, where Booblyc obviously drew inspiration. The look and feel is very similar, as well as the gameplay. That's not to say it's a complete clone. It's a refreshing change to have a bit more micromanagement in a tower defense game. At the same time, it's not so much management that it bogs the game down. The upgrades are extensive, and it's often not the best strategy to upgrade all your units all the way. This gives you numerous combinations to try and many possibly ways to beat a level. While not as hopelessly addicting as Kingdom Rush, Incursion is nevertheless a stellar game that will suck minutes if not hours of your afternoon away.

Incursion was good. I, like most, thought it was just a Kingdom Rush Clone, but it's still a lot of fun. The rally point mechanics definitely have a lot of variety to them, and make for some really challenging levels.

All in all, I approve, although I think a little more distance from Kingdom Rush would be smart if a sequel is ever made. Be creative! Soldiers, Archers, Magicians? Try diverting a bit more from the used and usual, and I think you'll be better off for it.

Considering that I've played Kingdom Rush about 7 times all the way through, "Kingdom Rush Clone" comes across as high praise.

Serious gameplay flaw/defect.
If you send a unit behind a tower you can't move it anymore, instead you select the tower.

Edit above: Although you can click tower and select a move pointer but it's troublesome when you have many units and don't know which tower they belong.
Also you can't see how many units are there when hidden.

I really like this game, but I agree with Tobberian that it's sometimes difficult to figure out where your fighters are. Also, the way the game gives out the special "rewards" is unpredictable and sometimes it can make or break a level. Sometimes I'll play a level, and get loads of rewards, and other times I don't get any.

All in all, it's a great game though.