A strange hovering island has appeared over the city, and your friend Mary has gone missing. What could a loving friend do? My instincts, after possibly one too many horror movies, would kick in and tell me to call the cops and get as far away from the town as possible. Clearly that wouldn't make for a very good game, so instead of a frightened lead character, Specialbit Studios made their heroine of tougher stuff. In the new hidden object puzzle adventure game Inbetween Land, you're going to make like the brave little toaster and go on an adventure! 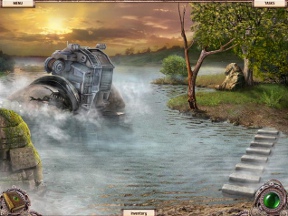 Here's the rundown: Your BFF Mary has been acting a little odd lately, and one day she vanished like a bag of chips (i.e. without your awareness). You head to the orphanage where you both grew up to see if the old lady there has a clue where Mary might have gone. You soon learn Mary had a weird obsession with the floating island that appeared over the city. After some investigating, you manage to open a portal to the island, but instead of calling in the scientists for some serious research, you hop through without a second thought. Inside is a desolate but stunning city inhabited by an extraterrestrial race that desperately needs your help. Fortunately, helping them means helping Mary, so everybody wins!

Use the cursor to pick up objects or start the various puzzles you run into while exploring. Hovering over active areas gives you a clue as to what actions can be performed. The hidden object scenes in Inbetween Land are fragmented, meaning you'll pick up pieces within a scene to build an item you'll use to gain access to more pieces. The end result is a key item that will allow access to new areas you can roam through! 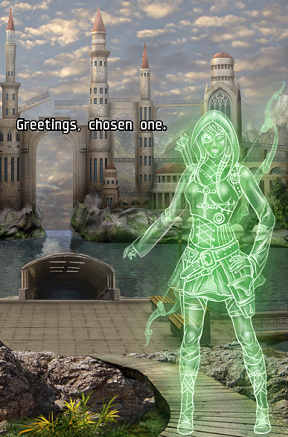 Analysis: Inbetween Lands is structurally very similar to most casual adventure games out there, featuring a hint button, a difficulty selector, and plenty of puzzles to sit and ponder over. Where it really stands out, though, are in the visuals. The cutscenes look like they were taken out of a comic book, while the landscapes look as if you walked into a steampunk fantasy, sans the owls and krakens. There are a few things that may seem odd, though, for a game so well-crafted, the most prominent being the lack of a map and the overall short length, both likely due to the fact that there isn't much backtracking and practically no way to get lost.

Ultimately, Inbetween Land feels like a mish-mash of multiple genres and at times may seem like it took some cues from the last Indiana Jones movie. The creative puzzles and decadent artwork make it a very a special find. The addition of the fragmented hidden object scenes is a pleasant change of pace from the usual list of random items. Inbetween Land is a quirky but entertaining game that may not take you days to finish but will have you wanting to play again if only to look at the alluring landscapes!