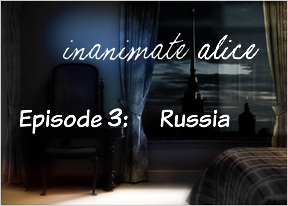 Months in the making, the latest installment of Inanimate Alice—Episode 3: Russia—is now available through an exclusive arrangement with the Guardian in the UK. Follow Alice as she deals with life and times, at age 13, in Russia with her parents through this rich interactive narrative realized in Adobe Flash.

Alice is a game animator. She likes to draw and create games on her ba-xi, a small handheld device that both entertains and consoles her in times of need. Even her friends affectionately call her "the animator," due in part to the animations that she draws of Brad, her imaginary friend. Since Alice is a budding game designer/animator, expect to see elements of gameplay introduced throughout each chapter, though a read-only version is also available.

The entire project is planned to span 10 episodes and chronicle Alice's life from 8 years to her mid-twenties as she grows up amidst the wireless communications of the 21st century. It is expertly written and directed by Canadian-born UK novelist, Kate Pullinger, with art and animation by Chris Joseph.

Don't miss this excellent and award-winning production. Catch the first two episodes at inanimatealice.com, if you haven't yet been introduced to the story, or hit up the Guardian for the third. And then look forward to more to come in the months ahead.

I think the URL to episode 3 might be broken. Either that or the page is down. That's too bad, I've been waiting a long time to see this new episode.

Sorry, please reload the page. I had the URL wrong when I first published it, but it should be fixed now.

Nice! These are always pretty interesting...

I have been enthralled by inanimate alice - the music, the plot, and the video. I was worried that the project (all 10 episodes) was too ambitious. But I am thankful to see alice back.

Now if I can only find the doll in the "Quiet" scene.

And of course I find it as soon as I post...

Hope to see you soon alice! Tell daddy to stay away from the bad men.

I haven't even played it yet but I'm so excited!

Just finished it; very well done, like the others.

Anyone else trying to figure out the meta-story here? What does her dad do? Who does he work for? Something to do with the oil industry, obviously, but what? What was the 'leak/contamination'? Why did they have to flee the country?

Great! I love Inanimate Alice! I was so excited to see this one.

Brad is one amazing dude, even if he is animated. He always comes through in the end.

Oh, and Valarauka - That might be explained next chapter. :)

I know, I know, but can you blame me for being curious?

Having trouble finding something...

Can someone tell me where to find the doll in the school?

I have never seen Inanimate Alice before, but I have got to say it was very well done. Future ebooks made like this would be nice.

i'm glad that there is a place on this site for new media and digital storytelling. works like 'inanimate alice' are great indicators of the sort of interactivity that art may hold in the near future.

how do you get brad to move on alice's player?

to catch the doll

Brad moves with the mouse.

Those wordy Guardian readers are having trouble coming up with a name for this new kind of storytelling. Blooks is the best they can come up with.

Gamers can do better than that surely...

Hmm, all I can think of is "interactive narrative" because that's exactly what it is.

The problem with the word 'book' is that it implies something physical. These electronic narratives are new media, which, by definition, are readily interactive new forms of communication enabled by digital technology.

Does it have to be a single word? Perhaps give this to the folks at Verbotomy and see what they come up with? =)

Help, can't get Brad moves in the player

It's just as cool (if not cooler) than the previous two! I am having so much fun playing it. but I have one problem.... I can't find the Doll in the "Quiet" scene! I've searched and searched and replayed it so many times, but I still can't find it. Help, please?

Turn your monitor's brightness WAY up. Mine was on 39%, and I had to raise it to 100% before I could see anything. (Don't forget to turn it back down, though.)

These Inanimate Alice stories are very interesting. Love how the games in the story get harder as the chapters progress, and how that relates to Alice herself growing up.

What do you think will happen to Alice and her family in the next chapter? I'm worried about them, *lol*.

How often do they update the chapters? I hope I haven't gotten into something where I have to sit and wait for months and months for the next episode.

It is now possible to create your own stories in the Alice style and add them to the "canon". iStories is a simple program that combines music, visuals and text.

It is ideal for primary classrooms but good enough too for "big" people!