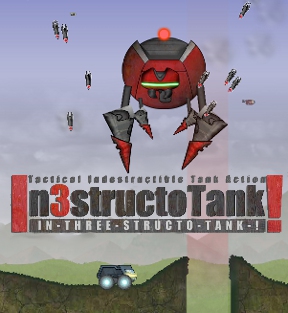 Hey there, Tanky boy, flyin' in the sky so fancy free... If you're been sitting there, thinking to yourself, "This day isn't explodey enough. It could be explodier." then you might want to pay attention because this is serious business. In3structoTank! is bringing you a whole lot of arcade action as you fight to save the world from the Evil General and his legions of deadly, determined, and (might we add) highly explosive baddies. You didn't really think this one through, did you, Mister Evil General?

You (as Dirk Danger) pilot an indestructible tank. You might think that means you automatically win the game, but since the tank has no weapons of its own, you have to get creative if you want to fight back against the hordes of determined enemies. Move the tank with the [arrow] keys and steer it into enemies or bombs; explosions hurl your tank into the air, where you can guide it into enemies to make them blow up. For each enemy you destroy as you bounce through the air, your combo increases, and when you hit the ground, you'll gain EXP based on how many enemies you destroyed.

Leveling up usually causes the enemies to appear even faster, which is fairly important. Since you can't be destroyed, most levels will only end in failure if you don't complete an objective within a time limit, or if enemies succeed in theirs. Of course, even an indestructible tank needs fuel, and if that runs out, you'll blow up. And you thought gas prices were the worst thing you had to deal with! Fuel depletes slower when you make things explode, and refills completely when you level up. As you destroy enemies you fill up your BOOM bar, which can be activated when full by tapping [up] to trigger a small explosion to help you jump. You also have a nuke at your disposal, which you can activate with the [spacebar] when ready to clear the screen.

In3structoTank! isn't that different from its predecessors. Even the new leveling system and nuke don't make many changes to what is essentially the same game as before, just shinier and tweaked a bit. The standard action is still as fun and bouncy as you've come to expect, and the bosses you'll encounter in adventure mode add a welcome challenge that keeps the game from becoming too repetitive. (Yes, I just called repeated and multiple explosions "repetitive". I have officially become jaded.) While not exactly what you might call deep, In3structoTank! is fun, silly, and just what you need to relieve tension in a cruel world that doesn't actually allow you to blow people up. Life is so unfair.

Is it just me or are the controls really wonky and not nearly as good as previous versions?

why couldn't you get hit by the bombs in that one level? it makes no sense that an indestructible tank needs to avoid bombs.

I'm having trouble with the nukes.

Half the time they go off the moment my nuke bar is full, and the rest of the time, hitting space does nothing and they won't go off at all.

Shouldn't that be ind3structotank, with a d? :S

@Raeden - Look at the title in the thumbnail at the top of the screen, it says "In-three-structo Tank". The "three" is the "d" and "e".

all my life i cared only of combos. combos was all i could think of.

I don't know if anyone else has had this problem, but I can't seem to play the game. It will load and I see the Armor Games animation, but then the screen flashes and all I get is black. I've tried reloading the page and reopening the link, all to no avail. I will try to restart the comp and see if that helps, but if any of you have a solution, that would be very helpful. Thanks.

I have the exact same issue as Farraman.

[Standard steps to try when this happens with Flash: 1) empty your browser cache and reload. 2) update your Flash Player to the latest version. 3) disable your browser extensions (especially ad blockers). 4) try a different browser. -Jay]

Thank you Jay for your speedy response, but nothing thus far has worked for me. I updated flash, cleared my Firefox cache, and even tried playing on Chrome and Internet Explorer. I noticed that once the screen flash occurs, the status bar seems to be stuck at "Transferring data from tracker.swfstats.com." I suspect that the data is somehow not being retrieved. I know next to nothing about flash game development, so if anyone in the community can help, it would be greatly appreciated. Thank you in advance.

[It sounds like the game is failing just after load and before anything else plays. The game is executing a script that tracks statistics such as how many times the game was played, primarily. Sounds like maybe some security software you have installed is interpreting that as a potential threat and shutting it down. Bottom line is that if you try playing the game on another computer and the game loads and plays fine, then it must be something on your computer that is preventing it. I'd look at any security software you have installed and see if disabling it allows the game to play. -Jay]

Fun game, but I'm encountering a weird glitch. Whenever I beat the Stage 3: Avoid level, I get sent back out to the Adventure Mode selection screen with no advancement, i.e., Avoid is still the furthest stage available. This has happened 4 times.

[Try emptying your browser cache and reload. Hopefully your previously downloaded version of the game swf is just corrupted and the reload will fix it. -Jay]

I've beaten all the stages of Adventure Mode but the secret mode is still not unlocked. Do you mean to tell me that I have to sit through all the movies too??

Well, I did it, sat through all the movies.

more of the same issue as scrundle (stuck on level 3), deleted my temporary internet files, refreshed the page, finished the level again and still wont let me advance to the next one...any more ideas anyone?

Still there myself, Jesse: clearing the cache and restarting didn't do it; neither did trying another browser. I suppose my in3structolife will remain unfulfilled.

lvl 3 no progress bug appears only on armor games: play somewhere else and the game will work perfectly (this is not anti-adversiting I'm only telling the truth)

can someone make a list on how to get the medals plz. i need the Friendly Fire, Mind your codec mouse and omg! an anagram!?

To get the Mind your Codec medal:

When on any of the codec movies, move your mouse around over the triangular area and you will see your cursor appear over your side of the codec screen.

Hit some of the fighters in the final "movie", in which they escort you back to your home city (there's also fireworks).

As for the anagram, I am lost as well. Anyone??

view the final movie until the end

alright got all the medals :) thanks guys

All my life, I only cared about combos.

Sure, there are so many flavors out there. Pizzeria Pretzel, Cheddar Cheese Cracker, Nacho Salsa, the list goes on, and there are so many regional offerings, too. That cheese-like goop in the middle. So many people were killed by that stuff, but I saved so many millions more with the energy it provided for myself, not to mention that sweet mana was also

the key to making the Indestructo Tank. It's just

so very delicious. That disgusting goo inside a cylindrical cracker, or pretzel? Sure, every once in a while there was a bad one with only half the filling, and my Tank exploded and I had to use a continue, but that's the beauty of being a video game character. I can just do a barrel roll (press z or r twice!) back out of the grave. So the next time you're at the 7-Eleven, remember that bag of combos isn't just a disgusting/delicious snack, it could be the bag that saves the world from total destruction.

I thought it was mindless, but I saved the planet, and of that, I am extremely indifferent, in true Solid Snake fashion.

Always drive under the green planes, because when you do that, they drop bombs! You have to let the bombs hit you, and steer so that you land on the planes.

Grab missiles Pip tries to drop into the volcano, and then let him shoot his missiles at you. Make sure you land on the red dot, then use your nuke. Repeat this three times, and he'll explode.

In this level, you can't land on blimps (The purple ships) three times, or you'll explode. A good technique to do this is to never go for spaces near the ships. Other than that, it's just like stage 1!

For Whizkid, jump over the communications towers, using the boom bar. Let his missiles hit you, and steer so that you hit the red dot in the center.

Here, you do the opposite of Stage 1, and avoid the missiles. The level up meter will fill up on it's own, so watch out!

This is it. You've been through many combos, and many stages. This is the final boss of the game. To defeat Betton, avoid his laser, and let his missiles hit you, so you can steer to the red dot. do this about ten times, and he'll die.

In the start of the ending video, use the fireworks to jump up and hit 5 planes.

When you're in a story video, move your mouse over the right circle above the text box.

At the end of the credits, wait a little while, and the face of Nettob in the top left corner will morph into the face of Betton!

I would love to get the friendly fire badge but that one segment of video out of everything else is slow for me. Any ideas on how to fix this? Thanks!