Max Tafelmayer and Thomas Kress of Munich, Germany, have previously collaborated on the impressive Robo Pinball game, which was reviewed here back in 2004. Their latest effort is this Shockwave 3D action puzzler that incorporates physics and a variety of compelling contraptions as the basis for its gameplay.

In Impulse, the basic objective is to move the white ball to the goal in the shortest time possible by placing bombs and other objects on the play field that will influence its path. 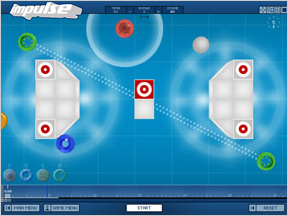 Each level exists on a vertical plane (not a top-down view) with the force of gravity acting to pull the ball toward the bottom of the play field. Play consists of placing any object(s) allocated for the level and then starting the simulation.

The gameplay may at first be similar to other action puzzles that you have played, but what sets this one apart is its exceptional presentation and the precision of its underlying physics engine, which Max programmed himself to ensure deterministic results. For example, the game allows you to manipulate the time line by dragging the time slider back and forth to fine tune the placement of objects that affect the path of the ball. You really have to see this feature to truly appreciate the precision gameplay it allows.

In addition, various elements exist to provide challenge and depth to each level by introducing new concepts or puzzles that must be solved, or bonus points to earn. For example, in one level hitting numbered targets in the correct order before reaching the goal will subtract time from the total (lower scores are better in this game).

Analysis: As impressed as I was with the presentation of Robo Pinball before it, Impulse is even more polished and appealing. The user interface is very easy to navigate, it rivals many commercial offerings, and it includes a variety of features that serve to extend the replay value of the game. For example, the level selection menu system displays the best score achieved for each level at a glance. Once a level is selected, the last setup can then be loaded to see how the best score was achieved, or to make adjustments.

Although the game is basically played on a 2D plane, the graphics in the game are actually 3D as can be seen by using the zoom and pan features that allow you to examine the play field up close, even during a simulation or while scrubbing through the time line. This allows for a novel and unusually precise perspective to the game, and it propels it above other similar games in its class.

The demo version contains 24 levels to play while the full-version boasts over 100. The pace during the first several levels of the demo is slow and may turn some folks off as it is set up like a tutorial, but it serves to introduce the player to the concepts and controls available in the game, and to this end it does an excellent job.

Impulse has just been released under their recently founded casual game company, Taparo, and features a playable online demo as well as downloadable Shockwave projector files for both Mac and PC. I found the downloadable "enhanced" version to perform better on my Mac than the online version, but your mileage may vary.

Cheers to Karl for discovering this fabulous new release! =)

great game! i wish I could understand physics that well, maybe i will someday...

Good game, but it froze twice before i decided "screw the browser version" and downloaded it. I love the concept, it has to be one of my favourites i've seen on here!

When is Flash going to work with our Intel Macs? This is mad, especially when you consider that Photoshop and Flash are majorly Mac motivated mapplication.... MMMMs.

This game is not a Flash app it's Shockwave, nor is this a complaint forum for Adobe users. =p

Meany. Anywayyyy this game runs slowly on Intel Macs because of the compatibility issues. And Shockwave is basically Flash, just optimized for games, and it runs slowly because it isn't a universal app (like Flash.) But no complaints here! :P
Anywho, the game is pretty neat, you really have to be ready to take a chunk out of your day to play this, but it is worth it.
A very neat idea and quite fun to play!

High score for the training episode is 8.850

A top-notch game in its class. I look forward to seeing what else Shockwave 3D can do.

My only complaint is that the online version seemed to freeze up every once in a while, and I'd have to reload the page. Luckily it saves your progress.

Wow, TornadoTK, and I thought I shaved off quite a bit from each of those initial levels. I'll have to go back to see where I can cut... 5 seconds?! pssh. =p

And I highly recommend downloading the 'enhanced' version appropriate for your OS, as it runs very smoothly without any hiccups whatsoever. And if you're on a Mac, it's absolutely necessary since there seems to be a problem with the online version when using the Mac Shockwave player.

(That's the one before the first combo-object level.)

I shouldn't be doing this, but here, I'll show you my final scores for every level. Now, I just KNOW someone's gonna pass me up.

J. was achieved without using the bonus

After going through them all again, I found lots of places to improve and got it down to 6.68

6.820!
Thanks to TornadoTK for giving me a goal to shoot for!

I've moved on to episode 2, though. Episode 1 was all brute strength, but now the real puzzle fun begins.

I find that a lot of the puzzles can be solved by endless tweaking of bombs, and when you're lucky, it finally works!

What I did was place one end of the teleporter under the ball, and the other about 3 cm above the other target. When the ball falls into the tele, and hits the target, then set a bomb to go off as the ball rebounds off the target, moving directly upwards. The ball flies into the teleporter again, with enough speed to make it through the block and hit the end target. I ended up with 860 in that level. Quite trick to figure out.

And I love the game!

Aha! A two-way teleporter! But of course! (*slaps forehead*)

I cannot play this game. It is very annoying how those windows slide around the screen all the time, when you navigate through the menus. Enough for me to rate it a lousy game.

Although this is not a Adobe complaint forum I wish to warn all other players that this may easily crash Windows Firefox browser as well <:(

And pllleeease game developers, avoid using Shockwave if and when you can do the same with Flash. Or, put a kind warning on your web sites that goes something like: "Shockwave may serioulsy damage your Web browser."

Amor Lassie - until Flash gets an integrated 3D implementation, Shockwave 3D is still the best thing going for those wishing to build 3D apps in a browser environment.

I have no idea what the developers are doing in this game that causes the browser version to crash like it does, but I'm guessing it's something that can potentially be fixed.

Frank - I highly suggest downloading the enhanced version for your OS, as it runs smoothly and flawlessly, and is really a very impressive piece of work, including the menu animations. =)

I know that some people prefer all kinds of fancy animation, and menus sliding up and down, but personally I find them annoying. It has nothing to do with my OS. They slide smoothly as they are supposed to, and that's the problem. Not a very user friendly way of writing software.

Okay, this does not seem to work in Firefox. As soon as the yellow screen comes up with 'loading', the browser just crashes, no message or error.

BTW, I never install things, such as demo games, for a short time. Never.

I'm going to try IE, otherwise I'm not playing this.

Ah, understood, Frank. The menu animations, although impressive to some, serve no useful purpose to the user.

TerrorByte - it doesn't require an install, just a download. No different really than loading up a Flash or Shockwave game in your browser, where the browser does the downloading for you. It's still a file that's being received on your computer that wasn't there before.

The file you'll receive when downloading this game is a self-contained Shockwave executable, nothing to install, just download, launch and play.

Downloaded the game, and glad I did =)
Now it runs smoothly. k -1220 with a single shot! I think that animated menus gives a pretty dynamic touch to games. And there is one useful purpose for them. They can catch your attention if necessary. Just better not to use them too much. BTW, does anyone know if it is possible to turn those instructions off?

Since the first episode is set up as a tutorial, I don't think you can turn off the instructions. They don't appear in the 2nd episode.

Just noticed that as well. One more reason to download.

Great game, I was pretty determined myself to beat 5 seconds (barely).

Some nice times you had there PIDB16! Was using them as a reference but couldn't quite figure out how you got so fast on some. Two I got quite a deal shorter though so you might want to give them another look. (1-D, 1-M)

My results, tried to match/beat the times by PIDB16 and Uky

I got fed up at 5.800. (For the first episode, at least). Fantastic game, one of the better physics puzzle games.

How did you guys get the low scores on 1-M? I have a guess at the strategy, but so far haven't figured out the exact positioning.

My guess is that you bump the ball to the right just before it bounces the first time on lower block...?

My results: (Tough as nails!)

5,240 Views
7 Comments
chrpa— Jayisgames needs your help to continue providing quality content. Click for details We escapists got our first Christmas present, a new game from Masa - and it's great! You find yourself in front of an elevator, which you'll get...  ...