Currently in Early Access, The Long Dark, or as I've taken to calling it, The Long Dark: The Wolfening, or The Long Dark: Help, Help, a Wolf is on My Face!, is a challenging first-person apocalyptic survival simulation adventure with roguelike elements from indie developers Hinterland Studios. In it, you play a man or woman whose plane has gone down in the Northern Canadian wilderness in the dead of winter due to a "mysterious geomagnetic storm" that's rendered the whole world still and silent. It's just you against the elements (and the wolves), as you scavenge for everything from food and water to wood and other supplies, constantly battling freezing temperatures (and wolves), dropping caloric reserves (and wolves), and your own fatigue... and wolves. At the moment, The Long Dark offers a mostly complete sandbox mode based around the Mystery Lake locale, with the promise of more to come, as well as an eventual episodic story mode. Your sandbox goal? To survive as long as you can, which is easier said than done since you start with little more than the clothes on your back. You'll need to scrape together wood, find shelter, melt snow for water, search abandoned buildings (and frozen corpses) for supplies, and cross your fingers that you find a hunting rifle because even if you have a knife, those deer carcasses aren't going to be around forever. 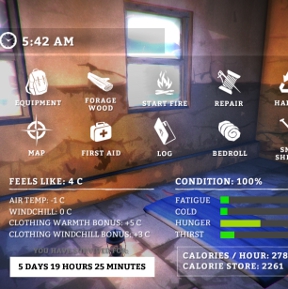 Though your starting location can be one of several points and the distribution of loot is random, the map will always be the same. It helps if you think of your first few games as dry runs to help you get to know the area, because you will die a few times, whether by wolf or starvation, dehydration, freezing... all the fun stuff. Certain items can usually be found in specific locations, such as the hatchet and the hunting knife, as well as a few frozen deer carcasses (mmm!), but everything else is down to luck. As you wander, your body temperature drops depending on how cold it is and the wind, so finding warmer clothing is a must. You can camp outside as long as you have firestarting material, or you can hole up in one of the abandoned buildings strewn around, but whatever your choice, it won't be easy.

The frustrating things about The Long Dark come down to common sense and balance. Why can't you layer clothing? Why can't you break down those flimsy wooden crates and chairs to turn into firewood? Why are you shoveling down pounds of cooked venison to barely make a dent in a caloric meter that drops at an alarming rate even if all you're doing is standing around in a warm cabin? Do I really need to re-boil that water I just boiled down from snow, especially since doing so took nearly an hour? At the moment, combat feels needlessly button-mashy... unless you shoot a wolf from a distance, when they lunge at you, you'll need to mash your mouse buttons to beat them off with your fists even if you're carrying a knife or a hatchet, and it just comes across as clumsy rather than frantic and desperate. Things like this break the stressful, desperate atmosphere the game is going for, because they're such simple things anyone would do in a survival situation that being unable to do them comes across as arbitrarily padding the difficulty. For a game that prides itself on trying to be a more realistic survival simulation, picking and choosing that realism simply to make things more harder as a video game might prove to be a mistake as far as potentially turning off players who were hoping, or expecting, a game that adheres more closely to the rules of nature. 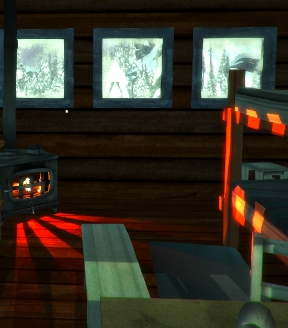 Of course, it goes without saying that The Long Dark is still in Alpha, and things are likely to change a great deal. What it gets absolutely perfect is an atmosphere of loneliness and desperation, from the way your stomach will drop when the wind begins to pick up, to the morbid glee when you stumble across a frozen corpse you haven't pillaged yet. Lacking any sort of story or flavor text, you stop thinking of these poor lost souls as human very quickly, and the game becomes a very isolated experience of simple day to day survival. It's easy to get "stuck" at some locations by trapping yourself in a cycle of needing to scavenge wood, hunt, melt/boil water, and sleep, and when you start to suspect you might have picked everything over in the area, things get tense in a hurry. At one point, stumbling near-blind and desperately dehydrated through a heavy blizzard, I came across a landmark I recognized, and I was surprised by my own relief. The tones of blue and white everywhere only add to the sense of cold and desolation, while the buttery reds and oranges you'll see when you light a fire actually make you feel warmer. Throw in some carefully sparse yet wonderfully chosen music and wonderful environmental audio and you have a game that can pull you right into it.

If you pick up The Long Dark now, you're buying into its potential more than anything else, because after a while the sandbox as it stands does start to feel a little pointless. There's no crafting implemented yet, once you've scavenged and explored everything the lack of other creatures or objectives is felt more keenly, so more animals and more maps will wind up making an enormous difference in terms of keeping you hooked longer, to say nothing of the upcoming story mode. Judged purely on what we have now, the existing sandbox alpha, The Long Dark still has a long way to go, so if you're waffling you might want to wait and see what the future brings. Despite its issues, it's a gorgeous and immersive game with the promise, potential, and talent behind it to evolve into one of the best survival simulations out there. With wolves.

I couldn't have said it better myself. I was very excited to get into this game. ive played it a few times now and I just feel like im beating a dead deer. the frustration level with how much I can't do to help myself stay alive is as high as my hunger meter when I haven't eaten for 3 whole mins

> Dora— Chucklefish's hotly anticipated indie sci-fi sandbox sim finally reaches playable beta. Fight, mine, craft, and explore your way, along or with friends, through a boundless procedurally generated universe aboard your own spaceship. When each planet has its own randomly created monsters and environments, you never know what you'll find.  ...

> Dora— Life aboard a space station... it's both more exciting and more normal than you might think! In this unique indie simulation, you'll manage your personal and professional life by interacting with friends, co-workers, and maybe even lovers on Spacebook while you increase your skills... but what could that mysterious countdown be about?  ...

> Dora— Lucas Pope delivers a bleak dystopian thriller in the form of a simulation in this game where you play a newly assigned border agent to the first immigration checkpoint opened in your rigidly controlled country in years. As restrictions rise and tensions mount, checking documents for accuracy and forgery becomes harder... especially when you find yourself forced to juggle the health and well being of your family against your own humanity.  ...

> Dora— Everyone likes to think they'd be a leader and a hero if a zombie apocalypse started, but this surprisingly challenging indie strategy sim proves it's not that simple. Take control of a group of five extremely different survivors who may or may not hate each other and make them work together to eventually escape the city... if you can keep them away from each other's throats. With randomisation of characters and locations, as well as a user-friendly content creation system, there's endless replayability to be had.  ...