None of my in-laws are gamers, so most of the time anything I'm telling them I reviewing sounds silly to them. My father-in-law, a retired serviceman who looks like Charlie Chaplin, chuckles bemusedly and half disbelievingly when I tell him I'm writing about human/pigeon romance, magical pony princess P.I.s, and amateur butterfingers open-heart surgery. Half the time I think they believe I'm making it up, so what am I supposed to do now that I've played I Am Bread, the latest bizarro indie game from Surgeon Simulator 2013 team Bossa Studios? Currently available in Early Access, it's the physics-driven tale of, yes, a slice of bread who desperately wants to become toast. You can move, sort of, via gripping with each corner in varying combinations, and using those corners as anchors when you flop around. If you're not using a controller, [1], [2], [3], and [4] each correspond to a different corner of the bread slice (is this really a real thing I'm describing?), while [Q], [W], [E], and [R] can toggle each corner's grip on and off (I guess it is), which will let you stick to things for as long as your grip meter, at the top of the screen, holds out. Don't worry, it regenerates when you're not using it. You click and drag with the mouse to move the bread around, but this only really works when one portion of it is anchored, otherwise all you can do is scoot around in itty-bitty increments face down. Your goal in each stage is to get yourself toasted, but be warned... if your edibility drops to zero, which decreases when you're touching the floor or any other dirty surface, you fail. Nobody wants to eat dirty toast, after all. And then? Once you're actually toasting? Why, then you have to stop toasting before you're burnt! Not hard enough for you? Well, sometimes you won't have access to a toaster... so you'll need to improvise. 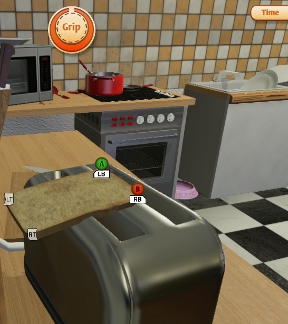 For all its goofy premise, I am Bread is almost ridiculously hard to get the hang of. It requires a lot of hand-eye coordination and reflexes, the sort of thing that can quickly take you from "Haha!" as the bread flops around to "What's the matter with you? The toaster is your home! Are you too good for your home?" You really do need to spend a while trying to acclimate your brain to the controls, and then to figuring out how to develop the best, fastest form of locomotion. Even if you're using a controller, the way the bread flips and rotates means you have to be able to mentally adjust to automatically changing directions. Most of the time it comes down to developing a rhythm and trying to make that second nature, but even if your reflexes are on point you can still get hung up on things. Being extremely soft and floppy, of course, you'll find yourself getting caught on or under on a lot of small lips and edges in pieces of furniture. What's "dirty" and what isn't seems a little arbitrary. Having the floor count as dirty, as well as ant-covered surfaces, makes sense, but the cat food dish apparently counting as "clean", as well as a skateboard and a chair (where you put your feet and your butt, respectively), seems strange. Difficulty jumps even higher after the first level, as surfaces get even dirtier, and thus decay your edibility much faster. It's like playing The Floor is Lava, only instead it's The Floor is Covered in Unspeakable Particulate and Kitty Litter.

The controller feels like a better choice over the keyboard, the shoulder buttons a somewhat more natural fit, and once you get the hang of things, the game plays smoothly and responsively, though the camera isn't always helpful when you're clambering over certain pieces of furniture or trying to look straight up or down. While the physics are fairly reliable, if some objects seem ridiculously fragile, the way in which you interact with everything isn't. I spent a while trying to knock a pan off a shelf, for instance, reasoning I could lie in it and "budge" it across the floor, only to discover that I hovered over it and couldn't actually lay inside it. Moments like that, where it's not your own skill but the unspoken limitations of the game itself letting you down, are the ones where the game stops being funny-hard and just gets annoying. 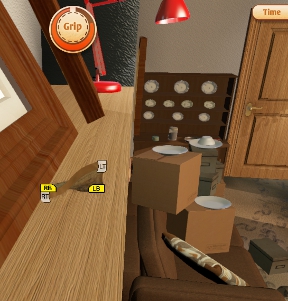 More than just flailing your way to a perfect golden brown, however, I Am Bread also offers large, destructible levels for you to explore. Turns out bread is capable of causing a lot of property damage. While you can just break stuff, you'll usually need to use a lot of it to get to where you want to go, knocking things over to make safe pathways or hitching a ride on a skateboard you set in motion. Part of the appeal is planning out where you want to go, and then figuring out how you're going to get there. I Am Bread manages to make any accomplishment and progress feel like a huge achievement, though its lack of instruction and basic repetition might be a turn-off for players who might otherwise enjoy the difficulty. The more I played, the better I got, and the more I felt Eye of the Tiger (Eye of the Fiber?) should have been an optional soundtrack. It's the sort of game that's fun to play on your own in spurts, but feels like it would be best enjoyed by a group of people egging, or harassing, each other on. It has all the trappings of the best sort of party game for a rowdy group of nerds, though admittedly how much you get out of it depends on whether your amusement at your own failure and flopping around outweighs the frustration of that repeated failure.

As the game's store page points out, however, this is not intended to be a gag game, and indeed there's a story here, though it won't be immediately apparent, slowly revealed through bits of text between levels. In its current Early Access stage, I Am Bread is playable with several levels, though not complete, and is actively soliciting feedback from its community to improve. At the moment, the game consists of four levels without a proper ending, and if you're hoping for a free-roam mode, well, keep hoping, but do send your suggestions to the developers! It's a weirdly charming little game, and one I kept coming back to no matter how irritated I got. The moments of frantic flailing as you try to clamber up a bookshelf like Lara Croft scaling the mountain are more fun than those where you need to shuffle and fiddle for precise angles to fit somewhere, but I Am Bread wobbles unsteadily into breathless, ridiculous fun more often than not. If you like physics-based games and have a high tolerance for failure, I Am Bread is one you should be keeping an eye on.

and i thought HOLLYWOOD Was Running Out of ideas!!!

Which reminds me, I still haven't used my Steam key for Catlateral Damage. Yes, the game where you play a cat knocking things off shelves.

This is the kind of thing where my initial reaction is "what why" but then I come to the sad realisation that I really want to play it.