Vampires and the gothic, macabre world they live in have traditionally been good subjects for pulp novels, comic books, and video games. In recent years, however, there has been a marked change in these fanged, angst-ridden bloodsuckers. No longer are they your standard evil monsters with thick Hungarian accents, widows' peaks, or a tendency to obsessively identify the number of flying bats in a room. Now vampires are seen as misunderstood tragic figures, and some are even considered good guys who try to actually help people (when not thirsting for their lifeblood, that is). Such a character is John Turner, a street racer-turned-creature of the night who is on a quest for justice in Comic Book RPG's newest independent release, Immortal Souls. 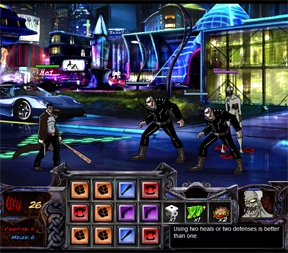 The story of Immortal Souls is standard graphic novel fare. In the city of New Haven, it appears that trouble's a brewing. Lots of evil zombies, monsters, and bad guys are roaming the streets, causing death, destruction, and mayhem in their wake. At first John Turner is on mop-up duty with his guns, baseball bat, claws, and fangs, dispatching evil with impunity. Then the plot thickens. What was once just an unholy street gang's mischief soon involves even greater forces of darkness. Soon a mysterious corporation appears, and John begins a quest on their behalf to acquire a series of artifacts from the modern-day Knight Templars and their minions. Along the way, John engages in much butt-kicking, becoming powerful by winning battles and purchasing new items.

Immortal Souls is an interesting cross between a Final Fantasy-like, turn-based combat RPG and Bejeweled. At its core, you participate in a series of battles involving John Turner versus one or more enemies. Instead of just choosing to attack or defend though, you pick your actions by selecting icons in a 4 X 3 grid. Actions are color-coded and include shooting (purple), martial arts (orange), vampire skills (red), and melee attacks (blue). John has stats in these four categories, as well as hit points (HP). The key to success in Immortal Souls is chaining two or more attacks by matching the same colored icons in a single path. In addition, enemies each have a random "color weakness" that gives them a shield bonus against any attack that isn't their weak color. Each battle involves breaking an enemy's shield with the right color attack, then finishing them off quickly before your character gets overwhelmed.

To add some flavor to the mix, there are items and upgrades you can purchase to help you out in battle. Items (such as trench coats, baseball bats and amulets) are sold in the store and will boost your character's stats. Thankfully, defeated enemies drop cash in battles to help pay for your vampire wardrobe. There are also special, limited-use upgrades that can randomize the battle grid or give you more power, XP, or extra cash at the end of the fight. These upgrades cost gold trophies, which can only be earned by winning battles quickly. 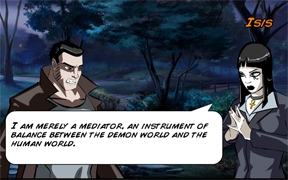 Between battles, the game employs a comic book-like story interface chronicling John Turner's epic quest. These cutscenes show closeups of the different characters talking in speech bubbles back and forth. In addition to moving the story along, these sequences show off the game's impressive background and character art.

Analysis: It's in the art and animation department where this game really shines. Each scene and battle takes place in front of detailed backgrounds that look hand-painted, and the look of the fighting interface fits nicely in the gothic theme. The animations are solid, taking advantage of the comic-book theme by relying on heavy line art and anime-like powerful attacks. Some animations, like the zombies' projectile vomiting and the ghouls' tongue attacks are especially impressive, though a bit gory. There is also some level of variety to the animations, adding a bit of freshness to each battle.

While I enjoyed going through the numerous battles in Immortal Souls and seeing the neat fighting animations, unfortunately things began to get a little irksome and repetitive after a while. The game's fighting interface is interesting and easy to get the hang of, but it has some issues. Unlike most turn-based RPGs, each enemy always attacks and hits, and does maximum damage each time unless you spend one of your turns using the defense icons. This means that your success in battle is really based on the random layout of the grid at the start, and the random color weaknesses of your enemies. If the enemies are all weak to colors that your grid doesn't have enough of, it's very difficult to win. And with no way of quitting out of a battle or running away, you are sometimes forced to play through a futile engagement knowing that you'll be defeated in a few more turns. Thankfully there's no penalty for losing battles - you just return to the map screen and can retry the battle with full health.

Having battle grid layouts with few matching symbols can be mitigated by using upgrade powerups that "re-roll" the layout during play. Unfortunately their use is limited, so once you use them up you need to spend gold trophies to purchase more. The problem is that earning gold trophies can be incredibly difficult at times since it requires you to take down your enemies in a low number of turns. With some grid layouts and enemy color combinations, earning a gold trophy is pretty much impossible. Perhaps making the special upgrades permanent or part of the normal cash-based store would have made things far less frustrating.

There's a lot of gameplay in this title (14 chapters with 4-6 battles each), but aside from different animated enemies and background locations, each battle starts to feel pretty much the same. Even the boss fights feel like you're just facing a standard enemy that does more damage and has more shield points. Gameplay becomes a matter of getting through battle after battle to see a little more story, and earn some cash and XP to better survive the next battle. Maybe this is enough for some players, but I felt there could have been a lot more to the gameplay. How about some branching story dialogue paths? Unique spells to cast? More interesting enemies with less predictablity? Better use of the environment and backgrounds?

Ultimately, Immortal Souls looks great and has a unique interface, but its repetitive fighting system and restricted game engine may somewhat limit its appeal. Still, if you're a fan of vampire lore or turn-based fighting RPGs, be sure to check out the demo and take up John Turner's cause for epic justice. Only then can you see if Immortal Souls is really a bite above the rest.

It's pretty decent so far, but John seems to be incapable of unequipping any of his gear, which is a hassle to say the least.

I think you should be able to drag whatever you're wearing and put it in your inventory to take it off. You can also drag it into the "sell" box to recoup half the cost towards something else.

Because to get gold apparently you ahve to beat both zombies in one turn... I wonder if this move comes out later in the game...

Whatever ^_^ it's a good game, and since it's recently out I don't think many people will be very far so I'll wait to get a response! :D