Immortal Love: Letter from the Past

[Note: This game contains themes that may be upsetting to some. Please see my notes in the second paragraph for more information.]

"'Tis better to have loved and lost than never to have loved before." Sound familiar? The protagonist of hidden-object adventure Immortal Love: Letter from the Past by Friends 4 Games sure never wrapped his head around that concept... but to be fair, that quote was probably more for couples who discovered wild pizza topping incompatibilities than someone who wakes up imprisoned with their memories removed, so I guess I can forgive him for not moving on to bachelorhood after a good cry, an Adele CD, and some mint chocolate chip ice cream. See, turns out Jacques (you!) was deeply in love with Angelica, which was a problem since the wicked Count was of the "if I can't have her, no-one will" sort, and he shot her in front of you rather than let the two of you abscond. Two months later, with your memories cursed clean and awaiting execution in a cell, you're rescued on the eve of your execution by a strange masked man who tells you it's not too late to save her. But this isn't a simple story of your average jerk who can't take no for an answer. It's an unexpectedly twisted adventure with high action and some morbid leanings that will keep you guessing throughout. 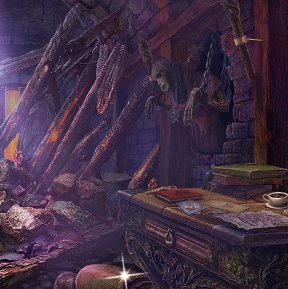 Getting out of your cell is only the first step... you've got to figure out a way to clear your name, too. Turns out Angelica was only gravely wounded, and you're being framed, not only for the attack on her, but for the murder of other men, while she's being forced to marry the count. Look, I'm not saying the odds are impossibly against you, but we're talking about a guy who does not take rejection well, and apparently has access to mind-altering curses, and poison that makes you burst into flames, so, just... good luck. Still, it's not like you don't have anyone on your side, and somebody who's willing to rescue you from prison with a cannon is a good friend to have. As you might have guessed, Immortal Love: Letter from the Past is a little crazy, but largely in a very good way. Its tale of obsession, vengeance, and dark magic makes for a rollicking good time, and that the presentation is gorgeous doesn't hurt either. Characters look... weird... at times when the game uses computer animation for them, but the artwork is otherwise lovely, and everything from the soundtrack to the voice acting is top notch too. The story is pretty morbid, as you quickly find out the count has a long history of dealing horrible punishments to the women he forces to marry him (and there's been a lot), and not everyone will appreciate that aspect of the story. The fact that the count is physically and emotionally abusive to women, having them punished and murdered in horrible ways for a myriad of ridiculous "infractions", may be upsetting for some, so caveat emptor. It's a big plus if you like your love stories twisted and filled with intrigue, but if you were hoping for something lighter and closer in tone to, say, the Dana Knightstone games, you may want to try the demo for this one before you commit. 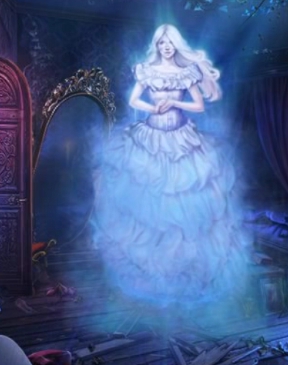 If you can get past that, however, or just consider it greater incentive to thrash the plot's villain, Immortal Love: Letter from the Past is a very well put together game. One neat aspect is an amulet that allows you to turn back time, so making a mistake that would otherwise be fatal can be rewound while you look for the correct solution to avoid a nasty case of the deads. It's a cool idea, though essentially this just means the game forces you to fail once before showing you the proper solution each time. You'll recover your memory as you go by finding personal items that trigger flashbacks that fill in the plot as well as provide you with clues of where to go and what to do. The puzzles you'll encounter will likely be pretty familiar for fans of the genre... slide tokens around on a track until they're all in their proper matching places, for example, and its hidden-object scenes, at least the ones not directly related to the plot, tend to be pretty dull. Most of them having you picking out tiny items, matching pairs, or hunting down silhouettes, and they fail to engage the way you want them to. These quibbles may be annoying, however, but they're still just quibbles, and by and large Immortal Love: Letter from the Past is built rock solid from every aspect. Besides, it automatically gets a million bonus points for giving you items and letting you use them throughout the game instead of making you find new ones to replace them and serve the same function. The story actually winds up becoming surprisingly complex for a casual game, and veers off in unexpected directions. It's not just a simple story of love gone wrong, and a lot of the things you learn will keep you guessing and revising your opinion on the outcome throughout, though it doesn't quite stick the landing. But if you're looking for a showstopper of a game with excellent storytelling and more than a few twists, Immortal Love: Letter from the Past comes highly recommended.