Allen Jay Roldan's short free indie horror game I'm Alright will probably make you flinch, and that's the point. As it opens, when you wake up in what appears to be a quiet and comfortable hospital, the sun is streaming through the windows and birds and singing outside, but things go wrong in a hurry. Suddenly, you have to escape, but with quick reflexes needed to sneak by enemies who can kill you with a touch, you'll find the game's handful of levels a definite challenge. Use the [arrow] keys to move, jump, and crawl, and hold [S] to hide in certain places. You'll need to figure out how the creatures you're trapped with work in order to get by them, but if you die, you'll just respawn at the entrance to the level you're in. 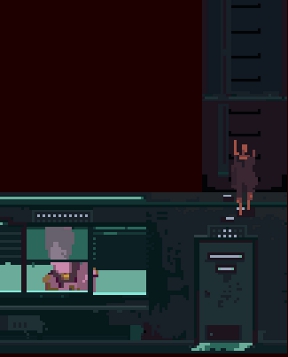 The downside to I'm Alright's emphasis on one-hit KOs is that not all of them feel fair when they can come about as a result of the somewhat clunky movement. If you don't hit ladders in exactly the right spots, you won't climb them properly, and when most of the situations you find yourself in require split-second timing, getting stuck climbing is a literal killer. The story and ending are deliberately open to interpretation, and it feels as if the setup might be a bit stronger than the payoff. I'm Alright's strength is in its rich atmosphere and fantastic use of sound... the way your heartbeat thuds in confined places, the jarring sound of an alarm, your character's weak but desperate and terrified breathing... it all creates a very oppressive air that, combined with working out how to avoid or manipulate the various creatures, makes the game feel oppressive and terrorizing in a very good way. ... even if most levels simply come down to a matter of ducking and running at the appropriate times. But despite its occasional awkwardness and simplistic approach to stealth, I'm Alright still manages to be harrowing and gripping. It's the sort of thing that you wish there was more of, especially considering how abrupt the ending is. Considering it's made by a student, I'm Alright shows its developer has a ton of talent and potential, and we look forward to seeing how we're made to cringe in the future.