Icycle: On Thin Ice from Wonderputt creator Reece Millidge of Damp Gnat, is a sequel to the original Icycle browser game. You're put in control of a chap named Dennis riding his cycle across the frozen landscape, chasing after the lovely lady of his dreams. This takes him across all sorts of bizarre locations, from shifting caverns to the interior of his own dreams. It's a physics adventure made with the sort of unrestrained creativity that used to dominate the casual gaming market. Playing Icycle: On Thin Ice is like being a kid again, only so much better. 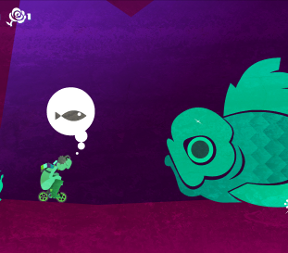 Three virtual buttons are all you'll need to ride your bike across the snow: left and right arrows plus a jump button that doubles as "float" when you're equipped with an umbrella. The game plays on momentum and well-timed jumps, but it's not necessarily about precision or realistic physics. This is an arcade platformer, and your main goal is to make it to the exit while collecting as many floating ice cubes as you can. Always easier said than done, especially when the landscape breaks and shifts, tunnels are like wormholes, and you'll change size on a number of occasions.

Rounding out the gameplay is the icebox, an in-game shop that features handfuls of items you can buy in exchange for ice cubes. Purchases range from the useful floating umbrellas and ice vacuums to cosmetic hats and sweaters. You can also save up to buy cube doublers, extra lives and level skips. A rudimentary in-app purchase system lets you refill cubes for cash, but it by no means dominates the shop or the game. 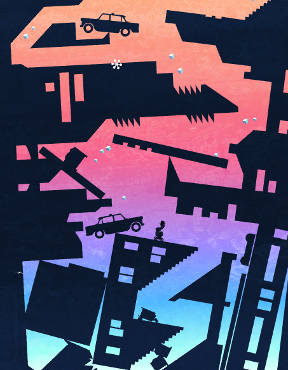 Analysis: A sense of whimsy permeates every aspect of the Icycle's design, from level layouts to power-ups, artwork, even the menu screens. Calling stages playable illustrations isn't far from the truth. Mastering Icycle is a matter of playing each level multiple times, learning how things shift, where to jump, how to fall, and what to avoid. Basic pattern memorization, but it's a whole lot of fun getting to that point.

In the department of Shortcomings and Things That Could Be Improved, Icycle has one mark on its otherwise pristine exterior: the controls. You're limited to backwards and forwards movement along with a jump button, which is simple enough in concept. Since the game encourages perfection, though, you'll run into a number of situations where grabbing those out of reach ice cubes isn't a matter of skill, it's blind luck. You don't have precise enough control over where the cycle goes to warrant a collect 'em all-style adventure, which can lead to some mild frustration until you get the hang of things.

With one scar on its checklist of features, Icycle: On Thin Ice presents a fantastic and imaginative adventure that's ripe with challenge and humor. There are dozens of levels to play through, coupled with 80 missions to complete as well as the special unlockable original Icycle game. Plenty to keep you shivering for hours on end.

This is a superb evolution of an already brilliant game.

What I found so striking about the first Icycle, in terms of gameplay, was that it was only when I slowed down and listened to what my coordination and the game mechanics were telling me that it flowered from a great game to a brilliant one and the same is true with this.

What Dampgnat have done with the playfulness of the art and the screens within levels has had me laughing from shot to shot and even in the most frustrating moments knowing that it should be achievable has kept me going through to 100% completion.

I really think this is a standout game for what they have made, from the music, the sound, the art, the level design and the artwork and animation this has been one of the most rewarding and joyous games I've picked up for a long long while.

I'm getting a surprising amount of replay value from the extra challenges, although I agree that the controls aren't quite as precise as they could be (playing on iPad mini). Doing the exact same thing at the exact same time doesn't always result in the exact same result.

For example, the hardest challenge turns out to be doing levels without deploying the umbrella, especially since you DO have to jump and the light "jump" tap can sometimes result in unwanted umbrella deployment and you have to have an umbrella equipped. One thing I have noticed is

the lowest-power umbrella is the least likely to "accidentally" deploy. The high-powered cafe umbrella deploys at the slightest excuse.