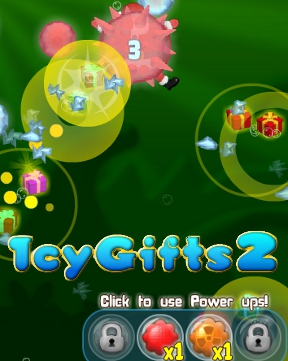 'Tis the season for explosions, and SilenGames have put an even more Christmassy twist on their original chain-reaction arcade game with Icy Gifts 2. This time Santa's been trapped in ice underwater, and only detonating a number of massive explosions dangerously close to his face will save him! Just click to drop a bomb, but be careful since you only have a few per stage, and try to time it when there are enough frozen explosives floating by so you'll detonate them as well, causing their fragments to trigger still more kabooms. Freeing Santa wins the stage, but there are frozen presents drifting around too, and if you manage to break them free of the ice and pick them up with your cursor, you can spend them on upgrades between stages. This time around you can also earn coins from completing achievements you can trade in for more presents, single-use items, or even try your luck at winning big on the submarine slot machine!

Icy Gifts 2 is one of those weird, perfectly addictive little games that's as compulsive to play as it is cheery and colourful. With its bouncy seasonal soundtrack and constant bursts of sound and colour, it may be simple, but its not mindless. It may be frustrating watching presents slowly drift around, waiting for them to come into just the right cluster, especially on the more sparsely populated stages, but it adds a degree of planning and challenge. Of course, that's not to say the game is particularly difficult, and it isn't meant to be. Aside from the cathartic potential of blowing up dozens of different things with a wide variety of power-ups, it's just the perfect sort of pick-up-and-play gaming that fits easily into a midday break, or an evening wind-down. If only all life's problems could be solved with a well-placed explosion!... well... I mean... they can, but then there's all that tiresome jail time and psychological evaluation after.

Level 45, are you kidding me? When someone figures out how to pass it please let me know. I have all the upgrades, and I think it's hurting me, the nukes just go off in such quick succession that Santa doesn't get enough hits before it's all over.

Never mind, figured it out. I thought the upgrades were automatic, you actually have to click them. Too much going on on the screen for this guy.

Level 30 is pretty much impossible without a powerup and you'll get 60 presents each time and 4 coins. If you play it a lot, you get lots of presents and coins, so just keep doing it until you feel like you have enough stuff. Then use a powerup to pass it.

Love it! I finished the game and then went on to Endless Mode. Level 38 in Normal did me in, and so did Level 80 in Easy. Haven't tried Hard yet though!

Actually someone and I can finish both Level 30 and Level 45 without using any powerup. A small tip is

to keep the first click away from any nuke, and keep it small.