You may remember Holy Wow Studios' Icarus Proudbottom Teaches Typing as a whirlwind of insanity and wonderment as you played a speed-based typing game with Icarus, and his owlkin, Jerry. Now our two heroes are back for more with Icarus Proudbottom's World of Typing Weekly, an episodic game packed with all the strangeness you've come to expect... plus... mystery and murder most foul! The gameplay remains the same as the original... you'll type passages of text as they appear onscreen, and any typos result in you losing a heart. Lose them all and it's game over! But type with speed and accuracy and you'll fill your Soul Gauge, which, when activated with [~], bestows either a points multiplier, or extra hearts! 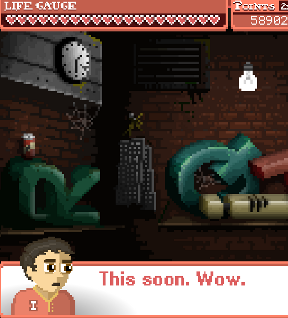 Sounds pretty basic, right? But where Icarus Proudbottom's World of Typing Weekly gets its strength is from its immense charisma, colour, and sense of humour. It's sort of like Blue's Clues meets The Typing of the Dead meets my childhood with a concussion. This series of planned weekly installments tosses in a narrative, as you find yourself dealing with a heinous crime and a lot of suspects, though since the game is on the short side, it ends with a big ol' "to be continued" as soon as this is established. You'll mostly run through the basics, a few typing drills that deal with proper hand placement and speed, though nothing particularly challenging at this point. World of Typing Weekly doesn't really shake up the formula as far as the gameplay goes, but with a lot of wit and some stellar writing, not to mention a distinctive style and presentation, it's well worth the ten or fifteen minutes it'll take you. Icarus Proudbottom is how educational games should be made... engaging, funny, and memorable.

I kind of like having to type out the important lines. It makes them seem that much more dramatic.

...Also, for what it's worth, here's my current theory regarding the mystery:

There was no murder. Icarus just fell and hit his head on something, and he's been unconscious this whole time, not dead.

Why do I suspect the above? I'm glad you asked...

Man it sucks that my comma key doesn't work...

That and my tilde key requires option+ç on this keyboard, thus that too doesn't work in the same. I've played it before on another computer but I still played the tutorial just in case, I couldn't get through it because of the apostrophe and couldn't get any hearts back once my bar had been filled due to lack of tilde access.

I much preferred the first game; this one just seemed to lose the wackiness of the original, and the storyline wasn't very compelling.

I'll keep an eye on the next few episodes, but I'm not expecting too much.

Haydn, you can always switch the keyboard layout on your computer...