I Wanna Be The Guy: Gaiden

I Wanna Be The Guy was a small indie platform game released by Kayin way back in 2007. If you're wondering what took so long to get a sequel, you probably never played the original. A quick refresher: you could be killed by falling apples. You could be killed by apples that fall upwards. If you avoided the apples, a cloud could drop out of the background... and kill you. And that would be how you got past one screen. 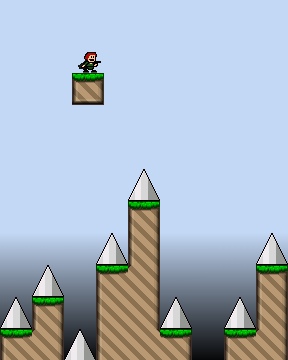 I Wanna Be The Guy: Gaiden lives up to its precursor's exceptionally difficult, exceptionally unpredictable, and exceptionally funny legacy, and it delivers in spades. Not to reveal any spoilers, but there are no less than three different ways to die between starting the game and selecting the first level to play. But enough about ways to die, what can you actually do in this game?

You play as The Lad, an intrepid hero who must — for some ultimately unimportant reason — make his way through some of the most difficult stages you will ever see grace your screen. To aid you, you have both jump and double-jump, and trickier terrain can be traversed by hitting [C], which will launch a grappling hook that can come in handy in several situations, the least of which being to swing across gaps. The hook can also pull you up to higher platforms and in special cases be used to grab and hold items. Your gun also comes into play, a small peashooter which fires a relatively weak but infinite number of shots, while holding [X] charges your weapon into a super-shot able to knock out enemies with a single blow or to activate certain (and of course, unmarked) triggers.

Though this game is quite short, at three frustrating levels, the sheer difficulty stretches the playtime quite considerably. At this stage, the length seems only temporary. From the blurb accompanying the release, we can expect more episodic content to come, and from the creativity and inventiveness shown here, the following installments should be well-worth anticipating.

Analysis: A lot of games like to hold your hand and whisper to you "No, honey, don't go any further until you have the key for the chest in the next level, you'll need it." I Wanna Be The Guy: Gaiden does the opposite. It will show you a key and a chest and both items can kill you by flying across the screen and smashing you in the face for no reason. Then the roof will fall on you and the ground will turn into killer, pointed spikes. If you get past that, who knows what will happen next?

The beauty here is the uncertainty and unpredictability of it all. Even if you know where to go and what to do, there is no telling what will happen next. Many is the time I've stood completely still, looking at the level ahead and weighing up which inanimate objects may kill me and how before I progress (and then get killed). If it sounds frustrating, it's really not, at least in my experience. I'd get so pent up with anticipation during the obstacle course that the inevitable death would make me laugh — every time. It's almost a relief to be treated like this, the game doesn't care about you, not one little bit. It just sits there and makes you wonder, can you get past that zone? Is it worth... just one more try?

Authors note: Just getting the screenshots alone for this review took more than 250 deaths to achieve. There's a bit of trivia for you all.

This is incredibly exciting. I replayed the original like a month or so ago, figuring a sequel would never get released.

This is going to be so much fun.

And not only does the game not care about you, it really is trying to kill you!

There are games that are hard and fun, that actually make it feel like playing them and putting time and effort into them was worth it. Such games exist all across the board. 'I wanna be the guy' is not one such game. Nothing at all appeals to me about a game that appears to have been intended to boost sales of computer monitors by causing people to punch them in frustration. And I can't imagine its sequel being anywhere near worth looking at, either.

IWBTG, the original, was absolutely brilliant. I saw a lot of people saying it was terrible, that the creator didn't know how to create real levels so just made things hard in bad ways, but I have to disagree; the level design was ingenious. It was definitely worth every single death.

So far I've completed the first level of this (exactly 200 deaths!) and it is just as good as the original.