When I was fourteen, I volunteered one summer as a Candy Striper at the hospital, and was dared one afternoon by one of the other girls to venture down to the basement, which was, of course, empty except for the morgue. Nothing happened, of course, but the scenario dreamed up by my overactive imagination as I crept down those dark hallways filled with disused furniture and echoes is something very similar to Bryce Maciel's free indie horror adventure I See You. Inspired by Ivan Zanotti's hit Imscared, I See You has you wandering lonely as a cloud through what appears to be a deserted hospital with only your thoughts and some increasingly ominous tutorial text for company. 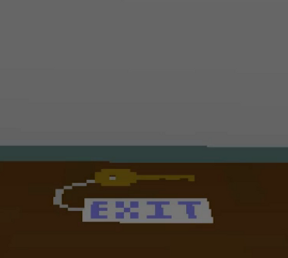 Find a key in each area to unlock the next door to proceed and follow the instructions... what could be simpler? All you need are [WASD] to move, the mouse to look around, and [E] to interact. While easy to play, however, if you're not a fan of jump-scares I See You is absolutely brutal to endure. The game has a slow but ruthless pacing and execution of its frights that will still leave you wanting if what you want is a story, but will definitely get your heart pounding. While definitely similar in style to its inspiration, however, it's also far less clever in execution, requiring you to do little more than keep moving forward. It's a very on-rails experience, more like going through a haunted house at a theme park (WHERE MY SCAREACTORS AT) and leaving you squealing and breathless at times. I See You has some fantastic visual scares that made me whimper far more than a loud crash in the silence. Is one better than the other? Eh, I'd argue that both have their place and are easily worth experiencing on their own merits for the short time it'll take you to run through this one... even if you can't escape. Because

I thought the game had crashed for a minute near the end... then I realised...

(No spoilers from me. Just trust me, he can still see you...)

I thought the game was crashing the entire time I was playing it.

7,805 Views
3 Comments
chrpa— Jayisgames needs your help to continue providing quality content. Click for details Hi! Weekday Escape is here! We'll start with a short but sweet game from giucalistro. Next up is a game from TRISTORE, which is a very successful...  ...

4,783 Views
0 Comments
jayisgames.com— Are you looking for a fun and entertaining way to pass the time? Solitaire card games are the perfect option for you!...  ...