I Saw Her Too, With Lasers

Person meets girl meets grisly end... it's a tale as old as time, or at least as old as krangGAMES's zombie love story I Saw Her Standing There. It was a puzzle game about eternal devotion, misplaced affection, and the rending of flesh and stuff, and now with the sequel, I Saw Her Too, With Lasers, you get to carry on the legacy from a new perspective. Namely, as a scientist who is trying to find a way to cure our two zombified lovers who only want to be together... using the powers of lasers, holograms, and more to unite them in a peeling, squishy, smelly embrace. Still a better love story than... nah, that joke's old. Accurate, but old! 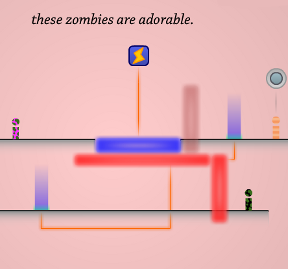 Your goal in each level is to guide your two zombie test subjects to reach one another by clicking the icons to activate various mechanisms around your lab. Lightning bolts activate and deactivate laser blockades and platforms, for instance, while holograms of delicious humans can be turned on to lure them around. Once close enough to each other, they'll automatically be drawn together, so all you have to do is make sure the coast is clear. Since the cure is all the way in the back of the lab because of... reasons, I guess, you need to work your two lovebirds through increasingly complex setups that get more and more dangerous to them. Just hit [R] to restart if you get stuck and would rather not send one zombie to an untimely redemise to reload the level.

Sound different from the original? Absolutely, and for some players perhaps too different. Instead of platforming, I Saw Her Too relies on timing and manipulation of your surroundings rather than giving you direct control of a character. It's challenging in a very different way, though its snarky sense of humour and clever premise remains happily intact. While the various mechanics are actually fairly clever and require a satisfying amount of planning to get around, scrambling to click on a bunch of icons strewn around the scene isn't everyone's idea of a good time, and having different hotkeys for each one might have made for a more streamlined experience... if perhaps a bit too much easier. The complexity of each level ramps up fairly quickly, though it usually feels like the difficulty is solely down to timing rather than actually figuring out what the proper course of action is. As most of gamers come with a genetic allergy to change, I Saw Her Too, With Lasers might be a bit much to swallow if you preferred the platforming elements of the original. But taken purely on its own merits, it's still a cheeky, smart twist on a puzzle game with some crafty challenges and a great sense of humour. It might be a little itchy... but it's definitely still tasty.

Play I Saw Her Too, With Lasers

I Saw Her Too, With Lasers Walkthrough now available!

I Saw Her Too, With Lasers Walkthrough

The game is a bit of a dick to players.

There's no reset button, forcing you to kill yourself if you make a mistake - which sucks.
There's no level menu meaning if you stop, you have to restart from level 1.

I got as far as the 2nd or 3rd green zombie level and gave up there.

Actually, there IS a level select option on the main menu, and though it isn't documented, you can hit R to restart. :)

I Saw Her Too, With Lasers Walkthrough

I love this game.
Adorable/hilarious. Borders on touching at times, and then it gets hilarious again.

The game has level select and says at the bottom to press R to restart so ?????

Just as bittersweet as the first game. But I just choose to believe that being a zombie probably isn't so bad. :)

loving the choices in endings

none of them are very good

Love the game and the music.

FYI: Link to discussion on game-site leads back to the game-siote but not the comments/review-page.

I love the music. It�s very soothing and perfect for a game like this. Funny, touching and a little bit challenging. Great game!