I Quit! Must Dash!

When the evil aliens came and took over Arthur Stone's company, he tried to endure the changes. Hawaiian Shirt Fridays? Gone. The free bagels in the break room? Gone. The randomly scattered acid pits? For some reason, still here. But this latest announcement, that his prized mustache will be the latest victim of their corporate malfeasance? Well that's a step too far! Tender your resignation and escape the building in I Quit! Must Dash!, a one-button retro platformer by Casino Jack. In each level, Arthur will constantly move forward in his attempts to get to the office exit, reversing every time he hits a wall. You'll control his jumps by clicking the mouse or with the [spacebar]. A quick tap will make for a short jump, while holding it will make for a long jump. 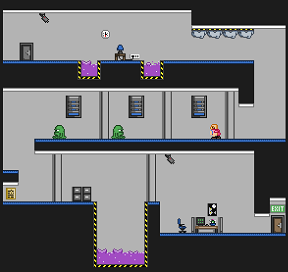 Each level will have hazards to avoid, ranging from acid pits to saw blades to alien co-workers. There are also pay slips to collect across the game's 35, which will unlock bonuses and secret gameplay modes. I Quit! Must Dash! also comes with a level editor to make office escapes of your own. Though the gameplay presented in I Quit! Must Dash! will be familiar to those who have played some of its one-button brethren, it has some well designed levels and the inclusion of the various unlockables will drive players straight through the end. Some minor improvements would have helped: Arthur starts off each level running, which can often lead to a death even before you've seen the lay of the land, and some of the time trial challenges require perfect timing of the kind not possible by this butter-fingered player. Still, with its whimsical humor and tough-but-fair challenge level, I Quit! Must Dash! is a must play for anyone who's ever felt like just another brick in the gleaming corporate wall.

Play I Quit! Must Dash!

In a game like this where deaths come early and often, it really needs to just reset the level instead of making you select reset every time--especially when a misclick takes you back to the main menu.

Space resets the level without having to click anything, or just R will reset within the level before you have died

Hilarious, and with difficulty that ramps up nicely. Even if your fast-twitch timing is good, getting all the paychecks is VERY tricky. Is that a tiny one-finger salute the protagonist gives you if you dunk him in an acid bath?
.