I Miss the Sunrise

If you've ever wanted to feel small and inconsequential in the span of the cosmic world, look no further than the night sky. With galaxies spanning across the known universe, the imagination can barely begin to explore the possibilities of where we are and where we might go. Outer space, to put it simply, is freaking huge, and that magnitude can inspire quite the creative streak when channeled correctly. Luckily for the hidden astronaut in all of us, developer Deltree has brought the world the stunning sci-fi strategy RPG game I Miss the Sunrise. 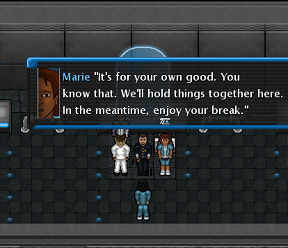 I Miss the Sunrise is the prequel to Deltree's previous game, The Reconstruction. The universe has gone into all out galactic battle after the Shine, and there are angry individuals called Lessers that love making things complicated. Who are these diabolical things, and why are they so determined to destroy everyone? You haven't the slightest clue, seeing as you have no memory of anything at all. You awake weaponless and naked after being freed from a gel container, greeted with the choice "join us or else." Under the circumstances, it's pretty easy to figure out the better option.

I Miss the Sunrise is controlled entirely with the keyboard, using [enter] or the [spacebar] to make choices and the [arrow] keys to move. When you start the game you get to choose which character race you want to be: humans from the Sol subspace, Augmented Humans, or Lacertians. Each race has strengths and weaknesses that affect your performance in combat. After selecting race, name, and gender, you'll be turned loose to explore the space station, talking with people and developing the first signs of your character's temperament. 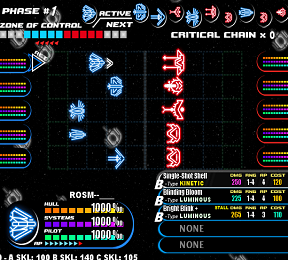 The space battles in I Miss the Sunshine are quite a bit different than what you might be expecting from an RPG. Each starts off with a map populated by nodes. By spending movement points and investigating these nodes, you'll slowly uncover enemy encampments and engage in turn-based battles. Choose your pilot and select from a handful of tactical actions to take, the main skill varying depending on which character you're controlling. Replacing the standard all-in-one health bar are three separate bars, one representing the pilot, one the hull, and one general ship systems. If any of these bars empties, that character or enemy is defeated. Not exactly whacking stuff with space swords, but the added strategy (and novelty) goes a long way.

Analysis: I Miss the Sunrise offers an RPG experience unlike most other role playing or strategy games out there. Much like going through an amazing book, you navigate the treacherous world with only a few people telling you the truth and the rest plotting how to use you for their own gain. All the while, you're doing your best to stay afloat and keep the world safe, even if you don't have enough memories to feel any affection for the world you're saving. 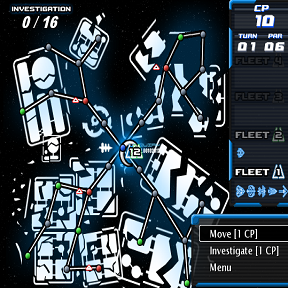 I Miss the Sunshine is pretty heavy on the dialogue, much of which is spent trying to explain the status of the galaxy you're inhabiting. The story that unfolds is well worth all the speech bubbles you'll race through, so don't go too crazy with the [spacebar] tapping. Apart from that, this sci-fi adventure is one that will have many aficionados of the genre feeling a sense of anxious jubilation at such a well-crafted game. You can build your own weapons, there are side quests littered throughout your space station stay, there are multiple levels to get through and friends to make along the way. It's rare to find a game like this that can last for hours without feeling monotonous, but all the small additions show that Deltree understands the desires of the common gamer who is always demanding "moar content!" Bizarre as it may be, the infinity and beyond statement feels fitting for I Miss the Sunrise through every second of saving the universe.

I had a lot of problems with this game and its prequel.

The first one was that it's slow and clunky; nothing moves smoothly. This is maybe a problem with the engine. Text scrolls slowly and has breaks at every punctuation mark or instance of italics. Moving made me feel like I was playing Pok�mon red, in a very bad way.

The second is that good god is it ever overcomplicated! Take a look at the game this is a prequel to: Attacks based on range, with elemental pairings for special attacks and rock-paper-scissors for regular attacks, colour-coded combo bars, three different fuel/life gauges, a system for limiting your opponents' ranges which in my experience triggered too infrequently to mean anything even if it was any use in the first place, individual squares becoming attuned to particular elements, maybe ten different status effects - ALL of which was crammed into the tiniest of spaces, with no capacity to inspect the board (I'll come back to that). Any two or three of those systems might have made for a good game, but it's overkill; this is someone who sorely needs an editor.

The whole thing might have been a lot more playable if it weren't for the fact that you can't do the #1 most important thing in a tactics game (which is what this basically wants to be) and inspect the board. You can't make strategy if you can't see what's going on.

All the criticisms above apply almost as much to I miss the sunrise; you're controlling four characters with what, ten, twelve different stats and two different attacks and a special power and none of it matters because you can't read the dense forest of numbers and brackets and special effects in your attack line and you surely can't see their defenses; all you're doing is prodding your opponent until you find an attack which hits the right life-bar and shows a Vulnerable! sign. That's not tactical, that's just... poking.

Oh! Oh, and when playing this dense, clanking game, I found myself going "god this is hard going, I'll save and go back to it later". Except I couldn't, because save points were only allowed once you'd watched the ten minute long cutscene and played the twenty minute scenario and wandered around until you found the save-point. A game which forces me to keep playing when I just don't care about it any more gets bad marks.

I can see why it's well liked though; the dialogue was sparkling, and the plot seemed like it was going somewhere. The personality bars were good too. But it's let down by the gameplay, horribly.

Completing this game took me over twenty hours.
The story grabbed me quickly and I found the characters quite likeable, which is more than what I can say about most of the RPGs that I've played.

But if I had known where the story was heading, I wouldn't have played this. Tragedy is not exactly my favorite genre, and it's unfortunate that the tone shift happened so late in the game.

And so many unanswered questions. The second game in the series might answer some of them, but from what I've heard...it's more of the same. So I have no interest in playing it.