Water, water, everywhere, and not a drop to drink! Actually, that couldn't be any more inaccurate here. In I-Fluid by Exkee, you are a drop of water, and your task is to navigate an intricate 3D world of a kitchenette that seems to be rather devoid of water. With the outward appearance of a platformer but the heart of a phuzzler, I-Fluid boasts an incredibly realistic atmosphere and a solid set of challenges to go with it. 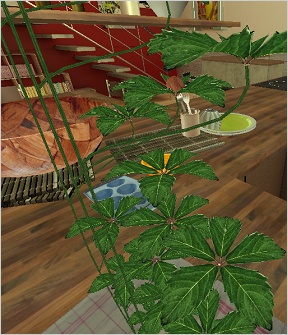 To move your drop around, use the [WASD] or [arrow] keys to move in the cardinal directions, while using the mouse to adjust the camera angle. In later levels, you gain the ability to jump and double-jump ([left click]), stick to objects and climb up walls ([right click]), and even embody certain objects and control them (hold both mouse buttons). Gaining these new skills not only lets you beat each new level that comes along, but also lets you access previously-unreachable levels in the level select screen.

In some cases, your goal is to reach the end of the level and tag a special flag. Other levels have specific requirements, like knocking nuts off of their perches, rolling all of the tomatoes into fondue dishes, or knocking over a tower of sushi. Once you've completed the Mission mode for a level, you can then go back and try the Petals mode, in which you must find five flower petals scattered across the level, or go for the Time Attack mode, where you have a tight time limit to accomplish a certain task.

I-nalysis: (See what I did there?) If you're looking for a unique platformer bursting at the seams with realistic graphics and fast-paced precision gameplay, you can't go wrong with I-Fluid. It might lack a compelling plot, but there's plenty of draw to this game. You might be asking yourself, why water? Why not play as a really tiny man crawling his way around these huge objects trying to reach the end of the level? That could work, but you really miss out on feeling really, really small. Playing as a little man in a big world means you're just a smaller you, but playing as a single drop of water, barely anything unless in a cup with thousands of other drops to drink, or just a single unit of rain in a storm of billions, that's being small. The truest sense of being tiny hits home in a level where getting to the end means you depend on the light of a firefly to guide your way. 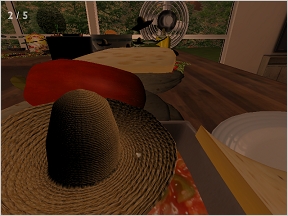 The premise is compelling, the gameplay itself nothing less than interesting, but in such a gorgeous world, there are some drawbacks which could effect how you feel about the game. First, the controls can be somewhat difficult to get used to. Depending on your size and the slope/material of the surface you're traveling along, you could rush along at ridiculous speeds or practically crawl through the level. Using both the mouse and the keys to control your direction can feel slightly awkward, but then again, this comment is coming from someone who's played too much Team Fortress 2 and is used to a slightly different control scheme for a similar perspective. And speaking of perspective, the camera often has some strange behavior, such as zooming in or out at awkward times and sticking inside solid objects.

The other major drawback is an uncomfortably familiar one when it comes to platformers like these. The hit detection in I-Fluid can instantaneously disappear in certain cases, then reappear in a similarly haphazard fashion, but by this point, you've already found yourself trapped somewhere that you don't want to be. The most frequent offender of this offense is the potholders made of slats of stone. It's very easy to fall down in between the slats and get stuck, forcing you to restart the level.

While I'm here, I'd like to point out something about cockroaches. Yes, cockroaches. In level 13, you'll encounter the thirsty little buggers who will chase you around and try to drink you. (Again, another example of feeling what it's like to be small.) They will mull around in a fairly rigid pattern until you come within a certain range and they begin to give chase. But when they do give chase, they are relentless, and are suddenly much more agile than before. They can also change the landscape you're playing on, unintentionally making levels impassible. Not exactly fair!

Cockroaches aren't the only thing that can trap you in a level, which is frustrating, to be sure, but it also speaks to the credit of the intricacy of the objects and how well they were designed. Rather than blocky objects that create odd sculptures when they fall, muffin tins fit nicely into one another, tomatoes and potatoes roll like the imperfect spheres that they are, and falling sugar cubes become a visual (although deadly) delight. A lot of work went into making the physics of this game feel as realistic as possible, and if you're willing to forgive the occasional hit-detection error, this game is thrilling in ways that other physics games can't compare to.

[Edit: Thanks for the feedback. FYI: we review download games on the weekend, browser games during the week. We have been doing this for a very long time now. Thank you for your visits! -Jay]

By the way, if you're looking for more online (browser) games, have you played all of these...?

I have no problem with downloadable games (plants vs zombies!), but the last 6 were windows only, which doesn't work for me =(. I do understand that the vast majority of games are made for windows, but it's still a bit of a bummer. Maybe my expectations are too unrealistic. I look forward to Monday.

I still love JIG. I thank you for many, many hours of happy distraction.

Badly optimized (always bugging that fps was low though I have a more than enough video-card).

I couldn't jump though it said LMB was jump. Quit the demo right away.

I rather enjoyed iFluid. However, I have a rather old computer, so I had a low FPS in game. I don't understand why the game creator put in that annoying "Player blocked due to low FPS"! The game reminded in a way of another game...I can't remember the name of it...I'm sure it was reviewed here on JIG, it bore a strong resemblence to "Katamari Demacy"...I really want to play it now! Darn!

Thanks for the support. :)
Yeah, I'm a Mac user, too, but there just isn't a lot of Mac game development going on. And when a Mac version does come out, it's usually after the Windows version has proven it worthwhile for the developer to port it over. When I can't wait, I just fire up Cross Over Games, or Windows using Parallels (on my Mac). They can handle most any Windows game.

Regarding the FPS issues, I guess that's one other thing I forgot to mention in the review. I can't say whether I have a good or bad video card (when it comes to hardware, I'm in the dark), but I also ran into "low FPS" issues while playing as well.

What I ended up doing was turning a lot of the video settings down to low quality in order to get the game to run more smoothly. But even after doing that, the visual quality was still tremendous. So if you're having a hard time with FPS issues, just turn the quality down, and you'll be set to go.

At least you guys can get it to run! I can't even get it to launch without crashing immediately. Boo!

I agree about the controls being difficult. And was "phuzzle" a typo? Or just slang I don't know? =P

"nor any drop to drink". The Iron Maiden rendition of The Rime of the Ancient Mariner is classic too.

Though I wish they had this game for Linux, it is still pretty great, and worth the money to get the full version. I never ran into the slow frame rate issues that others here have experienced.

@disarm76: I can't remember for sure, but I think "jump" is an ability you get after clearing the first level or two.

I hate that nearly every single time a downloadable game is reviewed (and it's almost inevitably Windows-only), somebody throws a fit.

Most computer games are Windows only. It's probably time to accept that fact and save yourself the grief every single time one gets reviewed here.

Yeeeeeeeesssss! It feels great when they review a game you requested... I had to create my own acount just for this... Thank you jay, I appreciate it...

Anyway, this is a good game, the gameplay is great, very fun, the only thing sticking out is the control scheme at times, and the time getting stuck, but it was made very well done and I hope for more, but dought it...
Excpect more request guys!

Ben!, I think it's perfectly okay to "throw a fit" if a developer neglects someone's operating system. How will developers know that there is demand for their games in other formats unless the users of those other formats "throw fits" and let them know?

I for one will certainly keep drawing attention to the fact that there is a substantial (and growing!) market of non-Windows users who enjoy playing quality casual games, and who would like to see some of these games on their preferred operating systems.

J, I think it would be a lot more useful to voice your concerns to the developers instead of whining that Jay never reviews games for your OS of choice. This is a game review site. You're shooting the messenger.

To be clear, I'm not saying you're part of the contingent that complains every single time a Windows-only game is reviewed (I don't know whether or not you are), I'm just saying that those are the type of people who would be better suited getting a different OS or accepting that a much smaller percentage of games are going to be released for their OS.