What are you doing? Protect those plant seeds! When zombies get it in their heads they'd rather eat seeds than brains, the plant kingdom rallies together to form the Vegendary Heroes, a group of fearsome warriors dedicated to fighting off the invading undead. I Am Vegend: Zombiegeddon is the tale of this epic struggle, taking a tongue-in-cheek setting and sense of humor from games like Plants vs. Zombies and setting it in a two dimensional defense world. 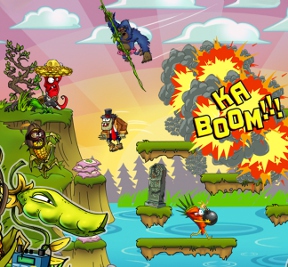 Zombies crawl in from the right (or fly, or jump, or whatever), and your precious seeds are on the left. Each vegetable soldier has an ability you can activate with a quick couple of taps, targeting foes and blasting them with everything from seeds to tomatoes to veggie-bombs. Gather coins as your reward and spend them on unit upgrades between levels, allowing you to fire faster, hit harder, and reload quicker than you can say "hang on a second, zombies, gotta reload".

Variety is one of I Am Vegend's strengths, and over the course of the game's 50+ stages you'll do more than just line up plants and tap on zombies. Some stages restrict you to certain types of units, such as bomber planes. Other stages throw boss battles at you or pave the way to bonus levels. No matter how you look at it, I Am Vegend is a fast paced and smart parody of a defense game that knows exactly what fans want: upgrades, humor, and zombies dying because they're zombies.

why on earth would anybody knock off plants vs zombies? it looks like a direct clone with maybe better gameplay