Hundreds, you should be a really easy game, you know? Tapping on circles to make them grow, increasing their value so everything adds up to 100. Making sure red active circles don't collide. Easy idea, easy to play, but when it comes down to actually getting somewhere, you present quite the little challenge. Part puzzle but bigger part arcade game, Hundreds from Semi Secret Software (which includes Adam Saltsman, creator of Canabalt) and Greg Wohlwend (from Solipskier team Mikengreg) is a minimalist experience that nabs your interest from the first level and refuses to let go until you've driven yourself mad with numbers and circles. 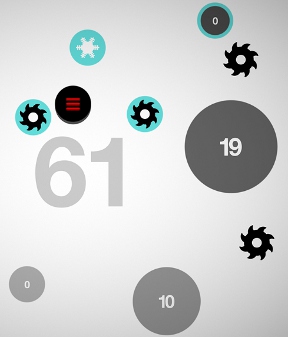 Each level in Hundreds populates the screen with a bunch of circles, most of which are marked with a big fat zero on their face. Sitting in the background is a tally of the value of each circle. Your goal is to tap circles to increase their value until that number reaches 100. Each time you tap (or, more likely, tap and hold) a circle, it also increases in size. While a circle is growing it turns red, and the catch to all this adding business is that if a red circle touches anything, you have to start the level over again. Sounds simple, but of course, Semi Secret never lets you off that easy.

Adding complexity to the circles/numbers situation, levels feature some fancy tricks to make your day a little more challenging. There are bubbles that need to be popped. There are bound circles that must be touched simultaneously. There are negative circles that must be deflated before you can work on that positive 100 sum. And there's more! The stages present a wide variety of obstacles and challenges to deal with. Having too many circles on the screen is the least of your worries when a sawblade is bounding around, threatening to chop your inflated shapes down to zero. 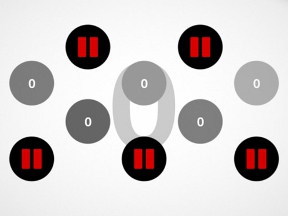 Analysis: Somewhat similar to Terry Cavanagh's Super Hexagon, Hundreds can be an infuriating game. The kind of infuriating that makes you angry enough to try, try, try again. Mistakes only take a fraction of a second to make, and just about every time you make one you'll slap your forehead because, hey, you totally should have seen that one coming, shouldn't you? But that's why Hundreds is such an engaging game: you only get better at it. There's no fear of relapse, your skills multiply as levels increase in speed and complexity, and the longer you play, the more interesting things get.

If you want to get all analytical about some of the design aspects of Hundreds (and we totally do), you could argue that Hundreds isn't necessarily a game about circles and numbers, it's a game about empty space. Your attention is acutely focused on one thing at all times: preventing collisions. Making things add up to 100 is almost a byproduct. To stay in the game, you've got to watch the ever-changing space between the sliding circles, predicting how it will morph once the shapes grow and start to bounce off of each other in new ways. It can be a very calming experience in a moderately twisted sort of way, even though half the time you're frantically pecking the screen trying to nail down a circle for half a second.

Simple ideas can make the best games, and the developers behind Hundreds have got that nailed down to near perfection. It gets everything right and looks (and sounds) good while doing it, which about all you can ask for from a mobile game.

looks like a nice game. but three times the normal price for something like this ($3 instead of $1)?

If it drives away less than 2/3rds of their customers, they'll make more money at $3. Maybe they understand their audience?

Seventy-four levels in, I can assure you it's worth the extra two bucks. This game is very carefully designed to be challenging without being overly frustrating.