Huenison has arrived, and Huenison wants to remind you how amazing retro-styled games can be. Developed by Simone Bevilacqua of Retream and published by the retro gaming experts at RGCD, Huenison was inspired by a mish-mash of several classic arcade games, including Space Invaders, Arkanoid, Dyna Blaster, and Tetris. It's an abstract turbo puzzle shmup, a mixture of genres that guarantees you're in for an extreme challenge. 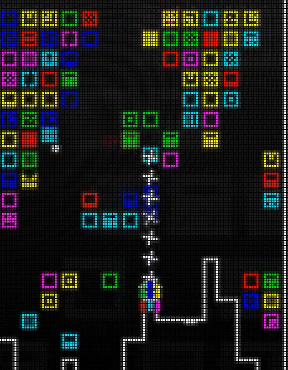 The basic idea behind Huenison is this: shoot all the colored bricks with the matching beam color. Your ship can move back and forth at bottom of the screen, swapping between six beams with the press of a button. Fire upwards and clear out the tiny blocks as they slowly work their way down. Missing shots calls down the zapper line one tick at a time, threatening to end your game. Letting blocks touch the floor raises that section a little, giving you less room to maneuver as you try to keep the screen clear. Different blocks act differently when shot, too, so don't think Huenison is going to let you off easy with 100% predictable block patterns and simple one-shot kills.

All of that seems fairly innocuous on the surface, but Huenison is far more than just the sum of its parts. There's this constant sense of chaos about the game that threatens to overwhelm you every other moment. Somehow, though, you manage to control that chaos one careful (but quick) shot at a time. You don't have time to think, but you mysteriously make time to do so. It's a very unusual experience that quickly hooks you with its subtleties and intensity. Huenison perfectly captures the essence of addictiveness and gradual mastery that retro games are so famous for, but it does so without pounding you over the head with it or making you feel like a failure.

We can sit and describe Huenison all day long, but actually sitting down to play it is what will win you over. The demo includes a generous portion of the final game and will easily have you frantically blasting blocks within seconds. The visuals, the C64-style soundtrack, the gameplay nuances, the multiple game modes and the crazy boss battles all work in perfect concert to keep you shooting and swapping for hours on end. Plus, the idea of saving the world while getting a high score is always appealing!

Just to tell everybody :-)

The game also comes til AmigaOS4, that pretty rare in the year 2013.