If the Stones had written "Paint it Pink" instead of "Paint it Black" they might not have had quite the breakaway hit, but we might have had Spydog's gravity-swapping puzzle platformer Howmonica a few decades earlier. You control a cute little buggy buddy through 50 levels who can turn all those boring grey blocks a fabulous shade of pink when she passes over them, and you need to pinkie-fy the whole stage in order to proceed. The catch? Aside from dangerous spikes being instantly fatal, you also can't jump, but you can reverse gravity to fly around, as well as fall off the top of the screen to come up through the bottom and vice-versa. 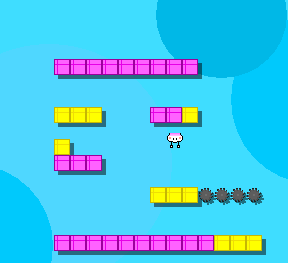 Use the [arrow] keys to move, and the [spacebar] to reverse gravity at any time.. even while in mid air! You can also use [A] and [D] to go back and forth through levels you've already completed of the 50 levels in total. Why, you're just a bow-tie and a fez away from being a Time Lord! Make no mistake, this is a very simple little game. It's the sort of thing that feels tailor-made for a coffee break, with its bouncy gameplay and bouncier soundtrack. The twitchy gameplay as you try to narrowly avoid impalement won't be for everyone, and for some players, new elements may be introduced too slowly to keep their interest. But as a sweet, cheerful, challenging little exercise, Howmonica is perfectly pleasant in the way that both brightens your day and keeps you on your toes. Uh... fingertips? Whatever!

Reviews should always include the number of levels, IMO.

I'm up to 49, and they're starting to get ragequit-worthy.

Review has been updated. :) Don't quit now, OtherBill. SO CLOSE.

I'm about to rage quit on 49 also. Please, someone, tell me it's doable!

I looked if 50 was last level, came back and game was lagging slower, finished. :D

Does not load; is just a white box (chrome, windows 8)

Hi sparkleshy, I'm sorry the game isn't loading for you. The closest I could get was Chrome on Windows 7, and it loads perfectly just like in every other browser I try on Windows 7 and Mac OS X. Try emptying your browser cache and reload the page. If that doesn't work, try another browser. If that doesn't work, try another computer to see if there's something wrong with your computer.

I guess my RQ-index is much lower that other folks here. I quit at level 13 - I could feel the rage building, after trying about 20 times to start that final sideways jump at just the right time.

I always regret having to quit these puzzle/skill games. I wish I could see all the levels so I could have a chance to solve the puzzles even if I don't have the skill to actually complete the level. When I saw that I could move through the levels with A and D, I hoped that I could see later levels, but alas, D only works to get to already-solved levels.

Still, it was fun while it lasted.

Same here, Barbera. As a charter member of the Crap Gamers Association, it's really annoying when linear levels mean that when you get stuck there is no way to find out whether that was just an unfortunate coincidence or actually the beginning of the end...

It was a fun game while it lasted though (but I was defeated somewhere in the middle.)