While the claim of holding a thousand doors may be a little much, Alawar's casual adventure game House of 1,000 Doors: Family Secret is certainly packed with family secrets, not to mention a twisted plot that reveals information about as slowly as an episode of Lost. The story is the star, but the gameplay pulls its own weight, leaving you feeling confidently thrilled as you crawl through the hallways of the mysteriously vanishing mansion. 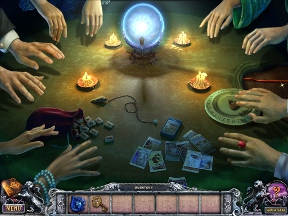 Kate is a supernatural author (her writings are of a supernatural nature), but most of the words she pens these days pale in comparison to her bestselling novel. A mysterious package containing a self-typing typewriter (shipped without paper or ink, by the way) invites her to a séance, so naturally she jumps at the opportunity to see one in real life. Nothing goes quite as planned, and Kate debunks the apparently fake gathering within minutes. But then, the ghost of her grandmother visits and instructs her to go to a location where a mysterious mansion will soon appear. Before long, Kate is wrapped up in the convoluted doings of the family that lives inside this odd little abode, and it only gets more interesting as you play!

Gameplay follows the traditional casual adventure/hidden object hybrid route, allowing you the freedom to roam a few screens at a time, looking for items that might help you solve the puzzles preventing you from going even further. The mansion you'll spend most of your time in definitely has its fair share of enigmas, and it seems like every time you solve one three more take its place. Puzzles aren't too complex, though, it's just a matter of finding the right item for the job, a task that almost always makes good, logical sense.

Apart from the exploration, discussions with family members who live in this dematerializing house, and wicked locks on the doors, you'll come across a good helping of mini-games, many of which are simple in nature but still a treat to complete. Hidden object scenes aren't too frequent, which is a smart decision since the game is so plot-driven, and when you do find one, you won't stay stumped on it for long. 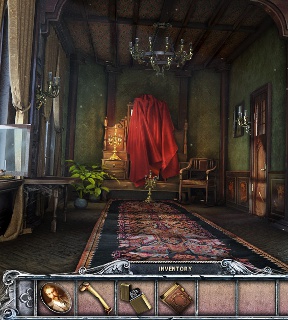 Analysis: The storyline in House of 1,000 Doors: Family Secret is a surprisingly complex affair for a casual hidden object/adventure game, though it won't take the place of a good thick book. But the ideas it wraps around you while you play are certainly intriguing, especially the Flying Dutchman of mansions the game takes place in.

The gameplay is pretty much what you would expect from a casual adventure game, so no real surprises to find there. Hidden object scenes often contain sub-scenes you can investigate, like opening suitcases or shuffling pillows aside to find more objects. Mildly interactive, but with no major flaws present. Alawar knows how to assemble a hidden object game!

Separating House of 1,000 Doors from the rest of the spook-laden hidden object games out there is the story. Told with just a touch of campiness (helped along by that wacky sound effect of tossing an item back in your inventory), you get the sense the game shouldn't be taken as seriously as the storyline might suggest. Because you're not expected to be scared or anything, the enjoyment factor shoots right up. Instead of mucking about droll "scary" settings, suddenly you're just a writer snooping around a vanishing building looking for gossip behind a mixed-up family history.

A good story that knows not to take its setting too seriously, House of 1,000 Doors: Family Secret is a great experience all the way through to the end. Satisfying and of good length (four hours, including the bonus chapter), you can't go wrong with a disappearing mansion and a writer looking for her next book idea.

A Collector's Edition is also available. It contains a bonus chapter, strategy guide, and more. Remember that Big Fish Game Club Members pay only $13.99 for Collector's Editions (or 2 club credits), and collector's editions count 3 card punches of 6 total needed for a free game.

Locations of Beyond Objects

These are listed, as best as possible, in the order you would encounter them if following the walkthrough below.

Unless indicated, move the indicated figurine as far in the direction given as possible.

Turn the 2nd one twice and the last one once.

Swap the 2nd and 4th books.

Did anyone else playing the demo of this end up with it closing to the desktop repeatedly through the trial? It was very frustrating, and I can't tell if it was the game or a problem with my computer. :(

[It's most likely something to do with your computer. Make sure your video card drivers are up to date. That is the single most common issue causing problems when running games. If the problem persists, contact Big Fish Games customer support, they will help you figure out the reason, and their support is excellent. -Jay]

Locations of Beyond Objects

These are listed, as best as possible, in the order you would encounter them if following the walkthrough below.

Unless indicated, move the indicated figurine as far in the direction given as possible.

Turn the 2nd one twice and the last one once.

Swap the 2nd and 4th books.

I am in Sams room and there is a brown bird hanging over his bed with lights on his belly and i've been hours trying to get past it and nothing works.....There are no directions telling me what to do.....so if someone could help me would be great.....Thanx in advance!

You should be able to take a peek at the telescope in Sammy's room and examine the pattern of the stars...from there take not of the pattern and then base it on the bird hanging at the ceiling so you know which light to turn on only.

Took me quite a long time to figure this one too.

Have you checked Sammy's Room in Chapter 4 of the walkthrough just above your comment?

I am trying to get the flowers on the mantle in place. Not sure what I am doing wrong. Help.

Donna -
Have you examined the flower painting in the dining room there? That will give you the order for placing the flowers.

I, too, am having trouble with the flowers on the mantle. I understand about the order but I can't, for the life of me, figure out how to move them around. I think it's a glitch. Help please :-)