Violent, visceral, and at times as profoundly uncomfortable as it can be perversely satisfying, Devolver Digital and Dennaton Games' (Jonatan Söderström, a.k.a. cactus,

and Dennis Wedin) indie arcade action game Hotline Miami will make you cringe even as it keeps you glued to your seat. You're just your average bachelor schlub living in neon-lit 1989 Miami... but then what's with all these strange messages on your answering machine? They send you out on missions that only end (and begin) with cold-blooded violence... the sort that would keep any sane man up at night. But maybe you're not so sane after all, considering the dreams you seem to be having. Take up the mantle of a mask-wearing hitman whose life is one of bloody routine until it all starts coming apart at the seams.

Gameplay is broken up in a series of combat missions, where you'll be called to get in, eliminate the targets and anyone in your way, and get back out alive. When the mission starts, you'll be given the opportunity to choose from several masks to hide your identity... you'll only have one to start with, but you'll unlock more as you go, and each one has different benefits. Move with the [WASD] keys, aim and interact with the mouse. Right-clicking picks up the item you're standing on, and left-clicking will let you attack or fire your weapon, while right-clicking again will throw it. 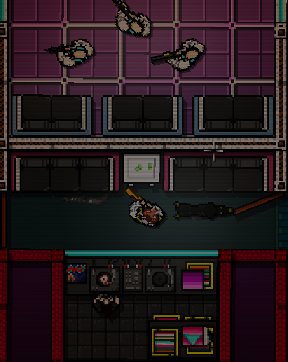 If you die, just hit [R] and you'll respawn back at the start of the area. Performing brutal kills or quick combos nets you more points, which are spent towards unlocking new weapons, and high scores will net you new masks to wear, granting benefits ranging from being able to survive a single bullet to seeing farther or moving faster.

At its core, Hotline Miami is about embracing its combat like a dance. Most enemies can be taken out with a single well-placed hit, but so can you, so you'll want to give a little thought to storming the castle in any given situation. Kick open a door to knock down the guy standing behind it, grab his weapon and incapacitate him permanently before he can get back up, then turn around and throw it into the face of the next enemy rushing you before finishing him off as well. Using your environment to your advantage is key to your survival, as is figuring out the best approach for any situation... like avoiding standing in front of windows, for instance, or trying to get in a fistfight with a doberman. Guns may be perfectly lethal, for instance, but they're also loud, and you'll need to be fast and ruthless to make the most out of melee weapons. Don't spend too long skulking around, though, since moving fast will often let you take foes by surprise. 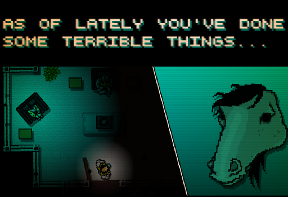 Analysis: Hotline Miami is a very good game, but not a very nice one. For such a pixellated style, many of the game's death scenes for you and enemies can be almost uncomfortably detailed, and if you're playing the game right, every level map is going to look like a strawberry jam factory exploded all over it by the time you're done. There really is a staggering amount of violence possible, and considering that's essentially the whole point of the game on top of the trippy narrative, you might want to steer clear if that's not your thing. It's the sort of game where repeatedly replaying the first several seconds of a mission over and over can't be the sort of thing that bothers you, though the compact level designs generally mean that if you're on your game, then the whole mission should probably take under a few minutes.

Combat is, by design, fairly simple, but extremely challenging. Because the game integrates a certain amount of randomness as far as weapons go whenever you restart, you need to not only move fast but think fast, which is where those straight-forward controls really come in handy. When you pull off a combo that leaves your heart racing because it all happened in an eyeblink, you can feel like Lord High Ruler of All Things Red and Squishy. The game starts out fierce, but later levels can be incredibly demanding, requiring split-second reflexes and a certain degree of adaptability as well, especially when glass walls become more prevalent and you need a greater reliance on guns. You may also wish there were a few more "boss battles", since the few that happen are particularly insane... and I mean that both in the "why you ackin' so cray-cray" and "I'M ON FIRE, I AM LITERALLY ON FIRE" senses. 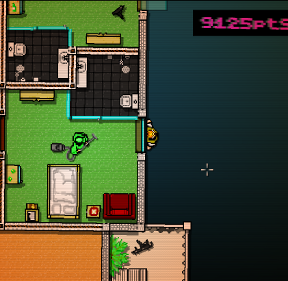 The story isn't really told so much as it is implied. You don't interact with a whole lot of characters beyond doing unspeakable things to them, but the small changes that occur in the familiar scenes between missions, even without much dialogue, paint a picture of a changing life... not necessarily for the better. There's something feverish about the whole experience, from the relentless violence to the surreal storyline that forces you to start questioning the things you've been seeing and doing. It's surprising how routine and familiar those horrifically bloody missions become, to the point that when changes do start happening later in the game, even minor deviations to what you expect become alarming.

Hotline Miami is more than a little monstrous, but if you like a challenge and don't mind getting some red on you, it's absolutely, 100% worth checking out. It's almost a shame that the story isn't a bit more front-and-center until late in the game, but in a way it's that careful, sly, subtle way the game has of implying things and working off your own assumptions that makes it work so well. Hotline Miami gives you the important bricks and you fill in the rest yourself with mortar mixed with blood and viscera, and as a result you become surprisingly invested in the events that unfold. It may give you the violent tools of the trade, and it's playing with you all along, and fans of literal break-neck action will devour this one whole, blood, bullets, brain trauma and all.

Is it just me, or did anyone else get to that preview image with "As of lately you've done some terrible things" in it and get Bad Horse's theme from Dr. Horrible's Sing-Along Blog in their heads?

Not mentioning the soundtrack is a huge omission. Some of the best music in a game this year.