Even in these tough economic times there is one thing you can count on: the drive of a tough little lady named Flo, determined to single-handedly revive every service business known to man. Flo (the familiar heroine of the vast Diner Dash series) has taken leave of her diners and is once again helping resurrect the hotel industry in Hotel Dash 2: Lost Luxuries, the new time management blast from Kef Sensei. 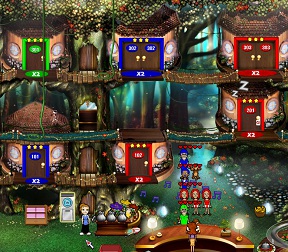 Unfortunately, Dinertown is in trouble, all thanks to the mayor (Mr. Big) having spent an inordinate amount of money to build the perfect convention center in order to attract the prestigious French Fry Festival. The good news is that the festival committee really wants to pick Dinertown this time around to host the festivities. The bad news (and isn't there always bad news) is that part of the contract specifies five luxury hotels to house the participants, and Mr. Big has already wiped out the town's budget for the year on the convention center. Enter Flo and her lovely side-kick Quinn to save the day!

The game begins with one decrepit tree motel which Flo and Quinn (mostly Flo) must run and upgrade until it becomes a five star palace. Guests soon arrive and Flo must bring them their luggage, provide room service and housekeeping, and eventually help them check out. Money earned in each round can be used to upgrade the rooms, beautify the hotel, or add much needed necessities like a cart so Flo can handle more requests at a time. Extra points can be earned if you have Flo "chain" tasks like serving room service several times in a row, rather than having the poor woman run back to the lobby each time someone wants something. Star upgrades on a room earn you stars which can be spent clearing away debris and uncovering hidden trunks which contain map fragments. Why map fragments? Because, unlike in Hotel Dash: Suite Success, you don't really know the location of the hotels that need to be upgraded, so you need to find those map fragments to suss out your next locations. 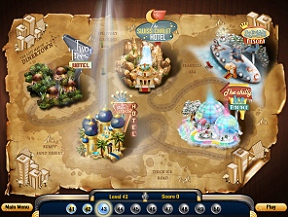 Each site is a fantasy hotel of epic proportions: a tree hotel, an underwater marvel, a Swiss chalet carved into a mountain, a gorgeous winter wonderland carved out of ice, and a desert oasis hotel made of sand. There are ten rounds in each location in which you need to meet certain goals and earn enough money and stars to restore each place to its former glory and locate your next objective. Every hotel will house a unique set of characters as customers, each with their own specific wants and needs. Some will be recognizable returns from the first Hotel Dash (the business women, the annoying dog people, snotty celebrities, etc.) and some are new to this game, like clumsy snowboarders and hungry sea captains. Each round becomes more frantic as Flo must deal with more rooms, more customers, and more demands. Keep the customers happy, see to their every need, and they will leave a big tip as they go on their merry way. And if all of the customer interaction wasn't frantic enough, Flo and Quinn must also deal with the evil mayor of Donutville, the normal site of the French Fry Festival, who is determined to sabotage the efforts of Dinertown and bring the festival back home.

Analysis: Creating a sequel to a successful time management game is a tricky business. Some series rest on their laurels, simply repeating the same old gameplay over and over without adding anything new (not to name names, but their initials are FF). Kef Sensei has definitely not done that this time around. Although the basic gameplay remains the same as in Hotel Dash: Suite Success, they have created subtle changes here and there which alters the strategy the player takes and definitely ramps up the difficulty. Kef Sensei has also cranked the graphics and each hotel is a visual delight. 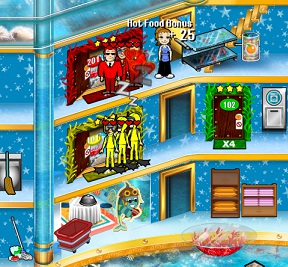 A new method of moving around the hotels has been added, ramps. These allow Flo to occasionally bypass the elaborate elevator and stair setups and quickly descend from the upper floors to the lobby. In each hotel the "ramps" have a different shape, whether they be swinging vines, iced slides, or magic carpets. The elevator setups are also more elaborate, so that the strategy of moving Flo from lobby to room to room must take into account the intricacies of the travel. Flo's trusty cart now comes with attachments, different ones for each hotel. The attachments unlock at different rates and you can only use one at a time, so another part of your strategy becomes which will be the best to use in a given situation. Do you want the fruit basket attachment which allows automatically putting a complementary basket at each room, or do you want the cell phone attachment, allowing you to make wake-up calls on the fly without having to knock on doors or use the lobby phone. Other attachments include a food warmer (yes, room service food starts out hot and can get cold if you wait too long to deliver it) a mop (for those levels with the clumsy snowboarders and scuba divers), an ice bucket (to help chill out angry guests), and a nifty nitro rocket which give Flo and her cart amazing speed. Choose wisely, young padawan.

Perhaps the biggest criticism of Hotel Dash: Suite Success was the ease of the game. Most players could blow through the 50 levels with an expert rating on the first try and finish the game in a day. The subtle changes to the transportation routes, the cart attachments, and a shuffling of the upgrade prices means that Hotel Dash: Lost Luxuries is a much tougher game. You may have to go back several times if you want to achieve the trophy for perfect levels. Kef Sensei has also dropped the "endless" mode of gameplay, allowing the gamer to concentrate solely on the epic story of Flo, Quinn, Mr. Big, and the French Fry Festival.

Hotel Dash: Lost Luxuries is time management done fantastically well, challenging, amusing, beautiful, and frantic. Take a few minutes and get sucked into the world of Flo and Dinertown. The gameplay is easy to pick up, the learning curve is gradual, and the action is frantic, causing the gamer to want to try to expert a level just one more time...

[Thanks for pointing that out, Loki. You are, of course correct and I've edited the review with something more appropriate. -Jay]

The Windows demo link isn't to Diner Dash but to another game.

[Thanks for pointing this out. I've fixed the links and hired a new editor. -Jay]

This may sound crazy but I can't for the life of me find the ice bucket even though I've repeatedly been reminded that I can cool down angry passengers with it. Please help!

Hi! Im at the last hotel and cant find the use of the second magic carpet.
I tried to find a way for use it but couldn't. How can i use it??

You don't have to use the magic carpets, they are there for convenience. If you are talking about the one on the right, near room 201, the only way Flo would use it is if you went from that room directly to the lobby.

Dunno .. I have to respectfully disagree with grinnyp here. I thought this game was MUCH easier than the original Hotel Dash. The

is so powerful that using it means there is no challenge to a level at all. I got expert, easily, the first time around on nearly all levels. Also, on some levels, there was a lot of deadtime when I had nothing to do, literally waiting for guests to arrive. Which is kind of weird in a time management game. And, since there's no endless mode like the original Hotel Dash, nor expert mode like the Cooking Dash games .. zero replayability. For the first time, I'm sorry I spent my money on one of the Dash series.

i purchased this game, and everytime i go back to play it i have to start from the beginning...where is the SAVE GAME option????